French physical chemist Hervé This is one of the founding fathers of molecular gastronomy. He takes James Mitchell Crow on a tour of the discipline - and dispels a few myths

French physical chemist Herv? This is one of the founding fathers of molecular gastronomy. He takes James Mitchell Crow on a tour of the discipline - and dispels a few myths

Molecular gastronomy is often thought of as a style of cooking, rather than a science - as the man credited with coining the phrase, how would you define it?

In 1988 when [UK-based physicist] Nicholas Kurti and I designed molecular gastronomy, we made a mistake, saying that cooking was chemistry, and that is not true - application and science are very different. 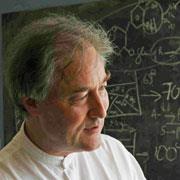 How did you come to work in this area?

Because of a Roquefort cheese souffl?, cooked in 1980. Well, it depends how far back you go - since the age of six I have had a lab, and all my pocket money went on books and compounds. My lab at home is wonderful - I have a UV spectrometer, a centrifuge, a microscope - no NMR yet.

On 16 March 1980 I had invited friends for dinner, and was using a souffl? recipe that said to add egg yolks two by two to the b?chamel sauce; this appeared strange so I decided to put all the eggs in together - and the souffl? was a failure. The next time I had friends for dinner I decided to make souffl? again, but this time I added the eggs one by one - it was better. The next day, I took a notebook and wrote: I have decided to collect old wives’ tales.

Do you work with the chefs who apply your research?

For decades I collaborated with many chefs, always trying to give them knowledge they could use to make new food.

But in the last 10 years, I realised it was a much better strategy to use the idea that Parmentier used two centuries ago to introduce potatoes to France, which were considered poisonous. At that time many people had nothing to eat. Parmentier was in the French army, and was sent to Germany - where he saw people eating potatoes and not dying. When he got back to France, he gave a potato flower to the King. Everybody saw the King and wanted the same - so in less than one generation Parmentier succeeded in getting France eating potatoes.

And this is exactly what I am trying to do - every month I give one invention to Pierre Gagnaire [whose Paris restaurant has three Michelin stars]. I put it free on his website - this is how I’ve been inviting chefs to cook more rationally, in a more modern way.

How else are you active in the area?

In 2001 the [French] minister for education asked me to introduce all this in schools, so I introduced a programme called atelier experimental de bou (flavour experimental workshops), for six year olds, and they learn, for example, how to make 1m3 of whipped egg white with one egg. We recently proposed a programme to translate these workshops for all schools in Europe.

Of all the programmes you’re involved in, is there an overall message you’re trying to pass on?

All this is rooted in a political idea - ’celebrate knowledge’. For example, with children, the idea is to attract them by their stomach, and then move to the brain. One of my mottos is: celebrate chemistry in general, and knowledge in particular - it’s a joke but there’s something behind it.

It’s true that when we began, we were upset by the poor state of cooking. I am not interested in expensive food - I want to contribute to the daily food of all the French people - and I want to change the way people are cooking all over the Earth. It’s a pity that they don’t use the right ingredients, don’t use them rationally, lose a lot of nutrients and waste energy, and this is because they cook as in the middle ages. People are completely irrational about food. We need more than one generation, certainly. But for science it is different - the change is in progress.