Death of a reagent

Fashion and progress combine to mean some reactions and reagents persist, while others fall by the wayside, says Derek Lowe

Science really does march on, you know. It may spend some time staggering around in circles, and the rate of forward motion varies, but progress does get made. And progress means leaving some things behind. Anyone who’s been practising organic chemistry for a while can think back to reactions and reagents that were once in far wider use than they are today. Old favourites like the Grignard and the Diels–Alder just keep on going, but not every reaction is destined for that sort of lifetime. 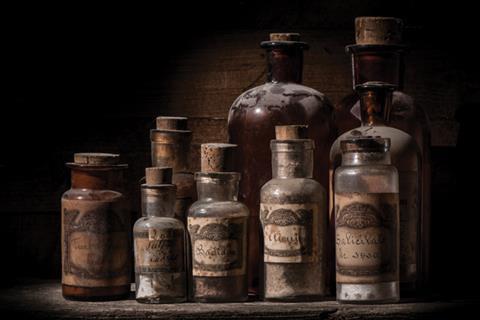 Many of these have simply been superseded: newer methods are higher-yielding, work on a greater range of substrates, are less hazardous, or create less obnoxious waste streams. The entire class of chromium-based oxidants is a good example. One of the earliest of these (Jones’ reagent) was already considered old-fashioned 30 years ago. It had been replaced, for many applications, by pyridinium dichromate (PDC) or chlorochromate (PCC) and related compounds. These can be used off the shelf (as long as they still are the right shade of orange or red). But you don’t even see either of those reagents around much any more, and I honestly couldn’t tell you the last time I used either of them. Newer catalytic oxidations are far friendlier, and the idea of using stoichiometric (or excess) high-valent metal just to do an oxidation seems a bit barbaric by now. All that chromium, just to make a ketone?

Reducing agents have held up better. Probably because no one worries very much about oxidised aluminium or boron byproducts. And catalytic hydrogenation will probably be with us forever, in one form or another. That reaction illustrates another thing that gives staying power: simplicity. You don’t get much simpler than hydrogen or borane. But the more elaborate reactions, particularly things that spin off massive byproducts such as triphenylphosphine oxide, are always vulnerable to being replaced by something more elegant.

To that end, it’s the catalytic reactions that will probably end up as the winning representatives in many reaction classes. But there’s a lag time in the catalysts that get used. Eventually, good old ‘tetrakis’ [Pd(PPh3)4] may fade from the palladium-catalysed coupling field, but for now it’s still used a great deal, even when other catalysts might be better. Metal-catalysed couplings are a world of wonder, and the field is nowhere near straightened out yet. Some of the reactions and catalysts we use now are going to turn out to be accidents of their order of discovery, things that we use until we find the real answers. You wonder what might have happened had the Suzuki reaction (for example) been discovered around 1955. An alternate path of chemical evolution that we’ll never see.

I’ve been speaking so far as if there were no such thing as fashion, but we’d all have to admit that it’s a factor. Sometimes, a particular reaction type comes along that’s so interesting and unusual that people can’t seem to keep from using it. Several years ago there was what can only be described as a craze for olefin metathesis – it seemed to show up everywhere. To be fair, it was often used because its unexplored carbon–carbon bond forming powers could solve problems more efficiently. But there were other examples that seemed as if someone just really wanted to run the reaction and was looking for a chance to try it out. Other crazes have run through the chemical literature, of course, and they can, at times, have as much to do with the chances of getting things funded (and published) as with their underlying scientific merit.

I’ve also been talking as if old reactions just vanish into the dusty storage closets, but that’s not completely accurate, either. There’s nothing stopping a person from running a Jones oxidation, a Skraup quinoline synthesis, or a Meerwein–Ponndorf–Verley reduction. Few do, but the world of organic chemistry is wide, and sometimes one of these old reactions works perfectly when nothing else seems to. You see this particularly in total synthesis, the last resort of some desperate graduate student or postdoc in step 34. You can imagine some older adviser or faculty member telling them: ‘You know, there was this reaction I used to run…’