Will English ever lose its place as the lingua franca of chemistry, asks Derek Lowe

In the autumn of 1983, I sat down at a small desk in my graduate department and translated a paragraph or two from a German chemical paper. I did a brutal job of it, since I’d only had one semester of undergraduate German. But I had a good dictionary, and I could turn the pages quickly enough to hack out a reasonable rendition of the text. My university’s chemistry department required all graduate students to pass this ‘proficiency’ test, and even though this all happened over 30 years ago, the whole thing seemed antiquated even then. The German-language chemical literature had been in decline since before I was even born. 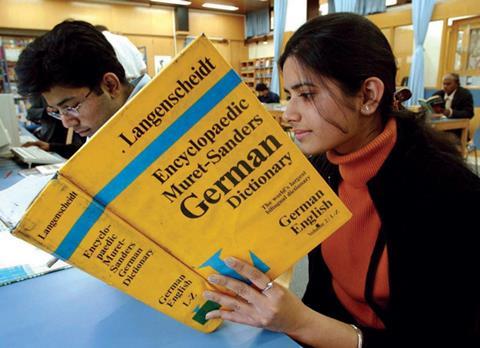 Today, English is the language of science â€“ but this has not always been the case

But in retrospect, the chemical references that I looked up during my graduate years were much more polyglot than they are now. I certainly preferred an English-language reference if I could get one, but for older papers you had to take what you could get. There was indeed German to deal with from time to time, in the pages of Chemische Berichte, Helvetica Chimica Acta and others, and French in Série C of the Comptes Rendus and in Recueil de Travaux Chemiques de Pays-Bas. Some of these journals are still with us, while others are long gone, having ceased publication or been folded together into successor journals, which are always in English. I’m nostalgic for them, in much the same way that I am for the shortwave radio stations (also multilingual) that I used to listen to while growing up, now mostly vanished as well.

I picked up enough chemical German to be the guy that other people came to when they needed an experimental section translated, an unofficial position I’ve held in several labs since then. I’ve always been tempted to tailor my translations to fit my personal opinions of the people asking for them – there was one difficult postdoc who I often imagined telling that the text really did say that he needed to drink his reaction mixture and collect his urine for the next two days. No joke – those Germans, eh? But I held back, and the opportunities for revenge (always untaken) have become fewer and fewer over the years.

I had a good dictionary, and I could hack out a reasonable rendition of the text

Non-English-language chemistry publications were the standard a hundred years ago. But the first and second world wars had major roles in the destruction of that order, as they did in the destruction of so many other things. Even by 1962, the editors at Angewandte Chemie had seen that the writing on the wall had very few umlauts in it, and launched an international edition. Publishing scientific results in a language other than English has slowly slipped down through levels of eccentricity and obscurity, to the point that you have to search to find a journal with no English in it at all, and when you do, you can be sure that the authors in it would probably rather have been able to publish somewhere else. (That may sound harsh, but it’s also true.) Some have wondered whether Chinese will try to take the lead, but I don’t see it happening. Chinese scientists themselves publish their best work in English as it is, and the legacy of the existing literature will, I think, keep the language going for a long time to come. Mind you, the organic chemists of 1900 may well have said the same thing about German.

As a native English speaker, I’ve enjoyed the whole process almost unconsciously. However, I can’t help but think that something has been lost along the way. Something always has been, though: keyboards have driven good cursive handwriting from the world, but long before that, the printing press had done the same to fine hand copy. Technology does that to us, but it gives us things in return: the benefits of having a common scientific language are great, and our current level of technology makes them even more apparent. There has been a scientific lingua franca before, of course – Latin, and now there is again. Was the many-tongued era of science just an anomaly between the fall of one and the rise of the other?