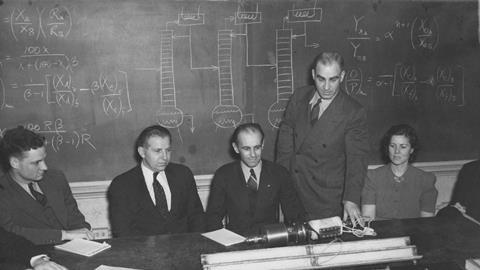 A few years ago, an enthusiastic A-level student told me that they were going to study chemical engineering. After all, he argued to me, it was simply chemistry but on a larger, more industrially relevant scale. I reminded him of that flippant remark ‘chemistry is simply physics scaled up’; you need physics to understand it, but chemistry involves a different way of thinking. Chemical engineering, in turn, requires another step in thinking, a change which happened early in the 20th century.

Among those who contributed to this shift was Merrell Fenske, a chemist born in Michigan City, a town in northern Indiana, US. Almost nothing is known of his family, but in 1919 he travelled 200 miles south to study chemistry at DePauw University, a small private liberal arts school. When he graduated in 1925, he moved to study industrial chemistry at the Massachusetts Institute of Technology (MIT) in Boston.

In the 1920s, MIT was the place to study chemical engineering, a subject being revolutionised by Warren Lewis and his friend and colleague Arthur Little. Rather than thinking of industrial processes in terms of the chemical reactions and their details, they broke down industrial transformations into ‘unit processes’: heat transfer, fluid flow, combustion, filtration, distillation etc. In other words, the chemistry mattered little provided one knew the key physical parameters governing a particular operation.

Lewis set Fenske to work with the Norwegian chemist Per Frolich, with whom he studied the catalytic conversion of syngas into alcohols, publishing six papers in the space of two years. In 1929, Fenske graduated and moved to Pennsylvania State to set up a new industrially funded laboratory in petroleum engineering. Frolich also moved on to a position at Standard Oil (today’s Exxon) – of which he would eventually become research director.

At the time, the automobile industry was expanding rapidly. Motor car engines were becoming faster and more powerful thanks to ever higher compression ratios, but this brought with it an insidious problem. The higher the pressure in the engine, the higher the risk of a spontaneous explosion during compression, or ‘knocking’. At the very least, this caused a characteristic pinging sound; at its worst, it risked destroying the engine altogether. In 1922, Thomas Midgely at General Motors had discovered that addition of tetraethyl lead to gasoline largely eliminated the problem of knocking. In 1924, this led General Motors and Standard Oil set up the Ethyl Corporation to make the additive (in spite of a growing number of reports of lead poisoning among workers). But the causes of knocking remained poorly understood, especially in relation to the composition of the fuel.

Pennsylvania was still a significant producer of crude oil – a highly desirable feedstock, low in sulfur – and Fenske decided to find a way to separate it into fractions, in the hopes of investigating the relationship between knocking and composition. His first paper shows the scale of his ambition. He did a preliminary rough distillation of Pennsylvania crude, then transferred nine gallons of the product into a still with an electrically heated iron fractionating column almost 11 meters high. The column was filled with alternating layers of Raschig rings (see Chemistry World, September 2008, p83) and steel chain. Over a period of 45 hours, he distilled fractions boiling from 43˚C to 204˚C, each of which he then tested as a fuel using an engine provided by the Ethyl Corporation. The standard test involved measuring the degree of knocking as a function of the volume of tetraethyl lead added to a gallon of fuel. 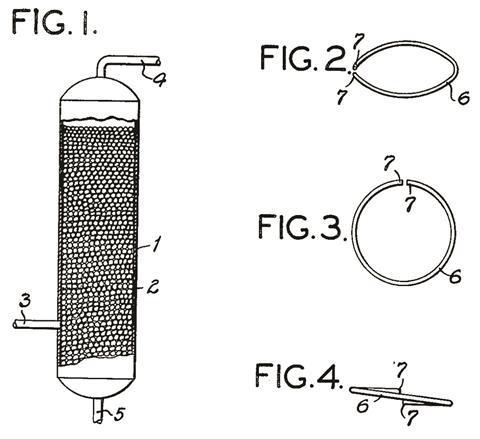 His fractionating column was not just a random choice. Fenske was developing the theory of fractionation to establish the best strategy for the construction of the most efficient stills. He derived an equation that established the number of theoretical plates required to separate two volatile compounds by fractionation under idealised conditions, a relation widely used today. Working with a pair of graduate students, he tested his relation by successfully separating the isomers of isobutylene, which boil only 3.3˚C apart.

Then the work of fractionating the crude began. Well before the advent of chromatography, Fenske’s team detailed the chemical composition of each fraction that came off their column and identified the many hydrocarbon isomers that they isolated. Alongside this work, they also looked in detail at the influence of the packing materials inside the column, comparing the performance of glass rings, metal chains, metal staples, segments of wire in zigzag segments, flat C-shaped rings and short lengths of helical spring wire. The differences between the materials were substantial – with the helices coming out on top. Better still, the helices tangled nicely, allowing the fractionating column to be unpacked very quickly when needed. Fenske found that a 100 theoretical plate fractionating tower 13m high packed with chains, could be scaled down to a 60cm glass column, simply by using the new helices. A short patent suggested that such helices could be made of virtually any material, depending on the chemical circumstances under which they would be used.

Fenske never lost his interest in chemistry and distillation, but applied his equation more widely to liquid-liquid extraction; during the second world war he contributed to the development of isotope separation methods for the Manhattan Project. His helices have never disappeared from chemical catalogues.

And as for the A-level student? To my surprise, I met him again a few years later, after he’d graduated with a first class degree. He was very happy with his choice but, he added, ‘I don’t think I saw a single chemical equation during the whole my degree’. Chemistry versus engineering – take your pick.