Few who have listened to the music of Richard Wagner can remain indifferent to it. 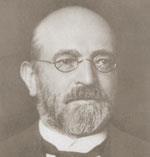 Friedrich Raschig. German chemist, 1863-1928. Also a businessman and politician, he invented industrial processes - such as the Raschig phenol synthesis - and the rings used in fractional distillation columns.

Chemists too have their rings, albeit metaphors for closed loops of atoms rather than a physical object. But in the realm of separations, a real ring, the Raschig ring, has reigned supreme for close to a century and has hugely extended industry’s ability to purify its products.

Fritz (Friedrich August) Raschig was born in Brandenburg an der Havel in 1863, the eldest of eight siblings. From an early age, he showed promise in the natural sciences and was encouraged to set up a home chemistry lab. Having done outstandingly in his high school exams he went to university to study chemistry in Berlin. After a brief summer stint in Bunsen’s lab in Heidelberg he got his doctorate under the mineralogical chemist Rammelsberg, and spent a couple of years as his assistant.

In 1887 Raschig opted for the private sector, getting a job with the Baden Aniline and Soda Factory (BASF) in Ludwigshaven. After three years he saw an exciting business opportunity: the preparation of pure phenol and cresol from crude English stock. He quit and set up his own business. Production started in 1891. His products - key disinfectants - were soon in great demand as a result of the Hamburg cholera epidemic of 1893, the Boer War and the Sino-Japanese conflict - and he was soon producing one third of the world’s phenol. 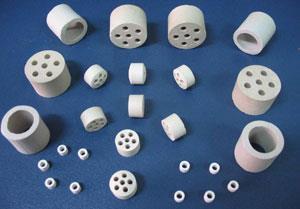 The secret of his success was his invention of an exquisitely simple, yet superior, column packing for distillations: Raschig rings, ceramic or metal cylinders as long as they were wide. Poured in vast numbers into a distillation tower, the rings hugely increased the theoretical plates - promoting contact between vapour and liquid phases - while minimising hold-up of the columns (the amount of liquid retained). Raschig and his employees kept the idea to themselves for almost 20 years and it was not until 1914 that he patented his invention when it was rumoured that the secret had got out. Shrewdly, he then started licensing his rings to competitors including BASF.

In the meantime he had not been idle. A charming and funny man, he married a local doctor’s daughter. It was a happy marriage and the couple had five children - four sons and a daughter. In his holidays he took his kids hiking and hunting in the forests. He worked hard, continuing his studies of nitrogen and sulfur chemistry while developing both new industrial processes and new markets for existing products. He invented efficient methods for the synthesis of phenol, hydroxylamine (the precursor of caprolactam, the starting material for nylon) and for hydrazine. He was
also politically very active, elected to the Ludwigshaven town council and later to parliament in Berlin.

The First World War, however, brought a series of almost crushing setbacks. His eldest son was killed in Belgium. During the subsequent French occupation of the Ruhr, German railway employees hid their two locomotives in his factory. When this was discovered, Raschig was heavily fined and sentenced to five years in prison. He fled to Heidelberg with his family where he worked in his friend Curtius’ lab at the university. He was soon pardoned and returned to his business, using his political position to promote Franco-German relations. He lost two more of his children before his wife died in 1928, a loss that hit Raschig very hard. Already in poor health, he died of a stroke at Duisburg railway station later that year.

Almost a century later, while chemical engineering textbooks list a wide variety of column packings which have improved on Raschig’s invention - including the fourth generation "Super-Raschig Rings" - the originals are widely touted for illicit moonshine production. Raschig had forged a ring of power indeed.