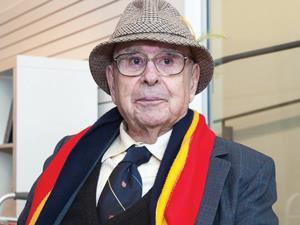 Weidenfeld & Nicolson have published Alfred Bader’s autobiography Adventures of a Chemist Collector. Bader is one of the world’s richest chemists, being the founder of Sigma-Aldrich. He is also a major player in the art world, and has built up a famous collection of old masters.

Bader was born in Vienna in 1924, but in 1938 was one of 10,000 Jewish children allowed to come and live in the UK. Deported to Canada in 1940, he studied chemistry at Queen’s, followed by a PhD with Louis Fieser at Harvard. He set up the chemical supply company, Aldrich, running it from a garage; it grew to become a billion dollar business. Bader was, however, dismissed from the company in an infamous 1991 boardroom coup. The book also describes Bader’s other life as an art collector, buying and selling paintings worth millions of dollars.

Ed. Bader is now 91, and has written a second book of memoirs, Chemistry and Art: More Adventures of a Chemist Collector (reviewed in the August 2008 issue of Chemistry World). He has received a multitude of awards and honorary degrees over the years, most recently the 2009 Pittcon Heritage Award which recognised his lifelong contribution to the laboratory supplies industry.