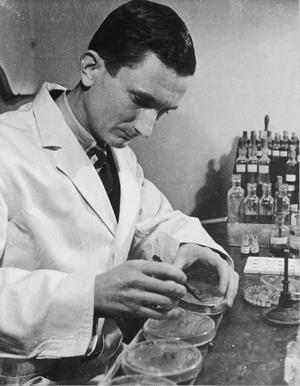 The scientists and companies involved in discovering and developing penicillin were commemorated recently, when the Royal Society of Chemistry and the American Chemical Society designated their work as the second International Historic Chemical Landmark.

At a ceremony at St Mary’s Hospital, Paddington – where Alexander Fleming discovered penicillin in 1928 – representatives from the companies and the research teams gathered together for the presentation of the plaque. Norman Heatley, the last surviving member of the original penicillin research team at the William Dunn School of Pathology, University of Oxford, was a special guest.

Although Fleming discovered penicillin, it was developed for clinical use by Howard Florey’s group at the University of Oxford. But during World War II research conditions became difficult, and the UK researchers turned to scientists in the US to find methods for industrial production of the drug. It is because of this cooperation that the International Historic Chemical Landmark has been awarded.

Ed. Norman Heatley died in 2004. While Fleming, Florey and Chain received a Nobel prize for their work in 1945, Heatley’s contribution was not fully recognised. It was only in 1990 that he was awarded an honorary Doctorate of Medicine from the University of Oxford.