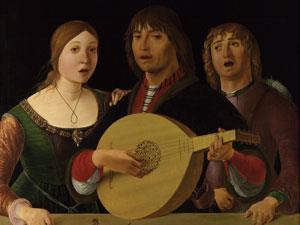 Soaps can form on the surface of paintings

The National Gallery in London has been carrying out a detailed study of tiny white inclusions in the surface of many of its paintings (dating from 13th to late 18th century). Using IR microscopy, scanning electron microscopy, energy-dispersive x-ray analysis and other techniques, researchers at the gallery have shown that these inclusions consist of lead soaps (especially lead azelate), which are the result of metal-based pigments reacting with the oil used to make paint. It is hoped that the results of these studies will influence decisions on the future storage, conservation and exhibition of valuable paintings.