The Centre of Excellence in Biocatalysis, Biotransformations and Biocatalytic Manufacture opened its doors in 2004 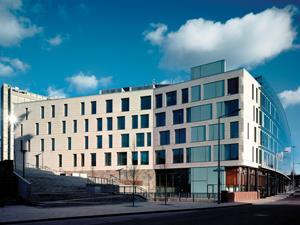 CoEBio3 is based at Manchester University's Institute of Biotechnology

A new Centre of Excellence in Biocatalysis, Biotransformations and Biocatalytic Manufacture (otherwise known as CoEBio3) looks set to open its core research facility at Manchester University in October 2004. It will focus on biocatalysis, looking in particular at directed evolution of enzymes to synthesise chiral molecules; whole cell biotransformations for rapid access to high-value fine chemicals; and biomimetic chemistry. It will also house fermenters to produce enzymes and biotransformation products.

In addition to the core facility, CoEBio3 will have two other major components. A biocatalytic engineering consortium will link together a series of Scottish universities and will contribute most of the research and scale-up expertise to help to produce larger quantities of interesting enzymes and biotransformation products. Meanwhile, researchers at York University will provide expertise in areas ranging from plant proteins to analytical science and green chemistry. CoEBio3 will have one large-scale fermentation plant which all of the participating groups will be able to use – at a site still to be chosen.

Ed. In 2007, Chemistry World reported the opening of the National Industrial Biotechnology Facility (NIBF), integrally linked with CoEBio3 to provide a ‘genes to kilos’ biotechnology open access service. The NIBF, based within the Centre for Process Innovation at Wilton on Teeside, was further expanded in 2011. For more details see www.coebio3.org