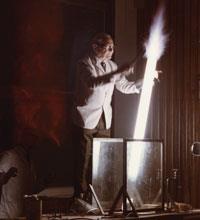 An explosive moment in a lecture by Brian Shaw

The well-renowned lecture on explosives by Lt-Col Dr Brian Shaw was first performed to the Nottingham University Chemical Society in 1928.

In appreciation of the pleasure that Brian has given to countless audiences, and to mark the 1988 Diamond Jubilee of his original lecture, we wish to create a Shaw Medal and prize to promote the role and encourage the development of scientific lecture demonstrations.

Ed:I attended one of Brian Shaw’s lectures in the 1970s and, although sitting on the back row, was still deafened by the bangs he created in what was a truly memorable and professional presentation.

Brian Shaw, a First World War hero and lecturer at the University of Nottingham, became the first recipient of the Shaw Medal, giving his famous lecture at a ceremony in Nottingham to coincide with his 90th birthday. He died in