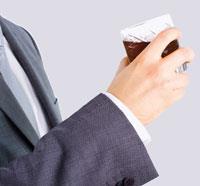 In his account of a journey across Siberia, The big red train ride  (1978), Eric Newby writes: ’On our first night in Irkutsk, we chose to open our bottle of Grant’s Glenfiddich whisky...and later decided to replace what we had drunk with a small quantity of local mineral water to eke out our supply. Later that evening I found that the entire contents of the bottle had turned jet black.’ Can anyone provide an explanation?

J S Swan of Pentlands Scotch Whisky replied that the most likely cause was the presence of traces of iron in the mineral water. In the presence of as little as 0.3mg/l of soluble iron, Scotch whisky will develop a green tint and if 1mg/l or more is present, the product will become black. The cause of the effect is the reaction of the soluble iron with tannins in the whisky.

John Davidson of London also replied that there is reputed to be a chalbeate well opposite the Wallace Tavern in Elderslie, near Glasgow, where the landlord keeps a jug of the water in the bar as some of his customers prefer their whisky black (Chemistry in Britain, November 1985 and January 1986).

Ed. Black whisky was popular in late Victorian Scotland but died out until the Mannochmore distillery produced the legendary Loch Dhu black whisky from 1995 to 2005. It is now highly sought after by collectors and very expensive.

The only commercially available black whisky today is C? Dhub, produced by a Scottish-Danish collaboration and popular in Scandinavia. It is blackened by adding large amounts of caramel.