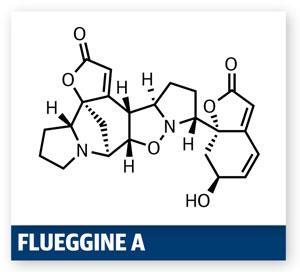 One of the most prolific sources of biologically active natural products is traditional medicines – whose active components can be exceptionally potent. Found in both Chinese and Amazonian traditional medicines, the Euphorbiaceae family of plants is a productive source of medicinal targets, including the Securinega alkaloids. This burgeoning class of alkaloids has proven biological potential, including research grant-winning anticancer, antimicrobial and antibacterial properties. However, the synthetic chemist in me suggests their intricate structures provide sufficient rationale alone – particularly the relatively rare bridged cycloheptane moiety and unusual isoxazolidine ring.

The structure and the synthetic challenge it poses also captured the fascination of a Chinese team led by Chuang-Chuang Li of Peking University, Shenzhen. The group targeted several molecules in this potent family in a recent paper,1 but it is their exceptionally short synthesis of flueggine A that really grabbed me. Key to the brevity of the synthesis was recognising that the isoxazolidine functionality could act as a keystone in this target, a conclusion also suggested in biogenesis studies.2 Considering this retrosynthetically, the team realised that the target is pseudo-symmetric – a dimer of similar (but not identical) halves, and that the isoxazolidine was the glue between them. 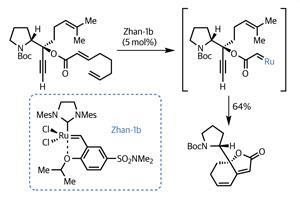 Working asymmetrically from the off, the team began their synthesis with the organic chemist’s favourite amino acid, proline. Four relatively high-yielding elaboration reactions installed several sites of of unsaturation, including an acetylene and a trio of alkene groups. The team then ambitiously treated this intermediate with a ruthenium-based catalyst, knowing that some metathesis action was likely to ensue – but with a high potential for competing reactions (figure 1). Remarkably, the team achieved their goal of a relay ring closing metathesis, and in an impressive yield, building a 5,6-fused bicycle featuring a rather sensitive dienoate system.3

The team then transformed this intermediate into (–)-norsecurine in only two synthetic operations (figure?2). Under radical bromination conditions, the dienoate was transformed into the corresponding allylic bromide. A relatively simple deprotection reaction then removed the tert-butoxycarbonyl (Boc) protecting group from the pyrrolidine, allowing nucleophilic substitution to form the seven-membered azepane ring.4 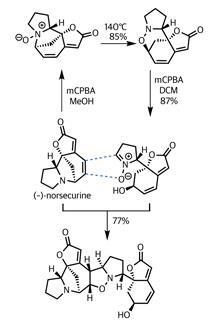 At this point the group separated their material into batches, working from a biosynthetic hypothesis that their target could be made by near-dimerisation of norsecurine. With one flask presumably in the freezer, they went on to elaborate the remaining material into something a little more reactive (figure 3). They first oxidised the pyrrolidine to the corresponding amine oxide. Under thermal stress, this material rearranged to form an eight-membered ring including an N–O bond (a 1,2-oxazocane). With a little more oxidant, it fragmented into a pyrrole oxide – a potent partner in 1,3-dipolar cycloaddition reactions.

This was exactly what the team had in mind. Adding their remaining (–)-norsecurine (an equally potent dipolarophile) and tickling with a little heat prompted the pericyclic reaction – forming the remaining isoxazolidine ring and uniting the fragments.

Again, selectivity was key to success in this reaction. Not only are there several side reactions that could have competed, there are also several potential orientations of reaction. However, the gods of stereoelectronics were clearly shining on the team, as they isolated flueggine A in excellent yield.

Impressively, the team did not simply call it quits at this point – they went on to complete the synthesis of another intricate member of this family of natural products, (+)-virosaine B. This only underscores the utility and practicality of their route into this series, as well as the value of dipolar cycloaddition reactions in the synthetic toolkit.