How China will tackle its science challenges

China is a scientific powerhouse. It currently produces the second largest number of scientific papers in the world (after the US), and delivers cutting-edge, world class research in areas such as chemistry, materials science and energy conversion. In 2011 more than half a million patents were filed to China’s State Intellectual Property Office, and in 2013 the country was home to 1.85 million science and engineering postgraduates, 25.5 million undergraduates and 1.48 million full time equivalent researchers. 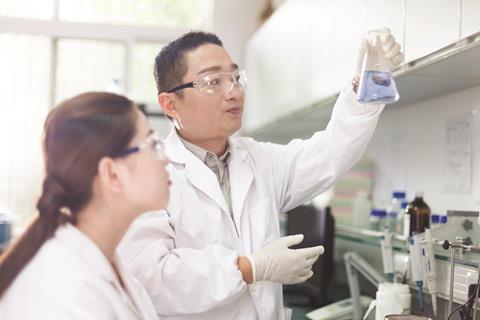 Indeed, China’s investment in all areas of research has been increasing rapidly in recent years; a trend that is particularly marked compared with funding in western countries, where it is either growing at very small rates or even decreasing. According to Unesco, this will see China outpace the US as the leading R&D spender in the world in the next three years.

This scientific growth has attracted comment and criticism. Some have questioned whether the growth is sustainable. Elsewhere, the quality of research from China, though recognised as of high quality but still lacking in world class originality and with breakthrough innovation. Others point to an apparent ‘brain drain’, with talented scientists leaving the country for international institutions. But are these criticisms justified, and what must China do to address them?

While China’s investment in research has increased rapidly, R&D investment is still far below the target of 2.5% of national GDP, set in the government’s national science and technology development plan (2006–2020). In the coming years, it’s likely that R&D will maintain a steady growth rate until this target is reached.

One determining factor for the continuation in investing into R&D is the fact that there are pressing needs for scientific means to solve the challenges that we are facing in China. One example is energy conversion, which is receiving more investment than in North America and Europe.

Another reason for this predicted increase in investment is the scientific background of China’s leadership, such as president and former chemical engineer Jinping Xi. Their expertise has helped them to better understand the value of science in solving economic and societal development issues, and to make effective decisions.

In addition, China is very generous in supporting young faculty members to establish their own independent research groups, while in other countries it is generally quite hard for fresh graduates to find faculty positions and get sufficient funding.

Of course, there is still room for improvement. Currently, many research publications from China are regarded as still lacking in breakthrough creativity and originality. However, China has only been active in modern scientific research for a few decades, in contrast to the very long history and tradition of scientific research and publishing scientific papers in the Western world; at this stage, we should not be too harsh in judging researchers. Increasingly, more and more Chinese researchers are starting to publish research that is on par with western countries in terms of creativity. And there are solutions we can implement to make research even stronger.

One option is to improve on how we measure success. Academic researchers in China are largely assessed by the number of publications they have produced and the impact factors of the journals their articles are published in – which has a direct effect on their funding. This creates pressure on researchers to focus their efforts on short-term, ‘quick hit’ or fashionable projects and discourages them from embarking on longer term, more impactful scientific research areas.

Therefore young chemists and fresh graduates in China should be encouraged not to focus purely on publications. Instead, they should be supported to develop skills in other areas, such as how to run a research group and how to generate creative ideas independently. History tells us that many important scientific breakthroughs are made by serendipitous discoveries; scientists will not be able to follow through with such chance discoveries if they are too preoccupied in producing research papers.

All scientists benefit from going abroad to gain working experience with other leading research groups (and vice versa), even though nowadays we can keep track of each other’s research through the literature. These exchanges enable cross-fertilisation of ideas and create synergies among teams, although some scientists have chosen to remain in other countries.

China is now pushing hard to recruit international talent itself, and to attract researchers of Chinese origin who are studying and working overseas. For example, the Thousand Talents Programme, set up by the Chinese government in 2008, provides generous financial incentives – such as research funding and personal remuneration – to recruit young professionals and established experts to China.

The current recruitment schemes though largely work well, it can still be improved in order to attract the kind of talented people based on our demand in China. For instance, the current selection criteria are based on the reputation of the university, the individual graduated from and the number of high-quality papers they have published. In the future, China will need to reconsider its approach and think about how to improve selection criteria.

China has come a long way in a very short time, and, if it can overcome these problems, is likely to move from strength to strength in the coming years.

Xinhe Bao is senior researcher at the Dalian Institute of Chemical Physics and executive vice president of Fudan University, China, and Ben Zhong Tang is chair professor at the Hong Kong University of Science and Technology, China