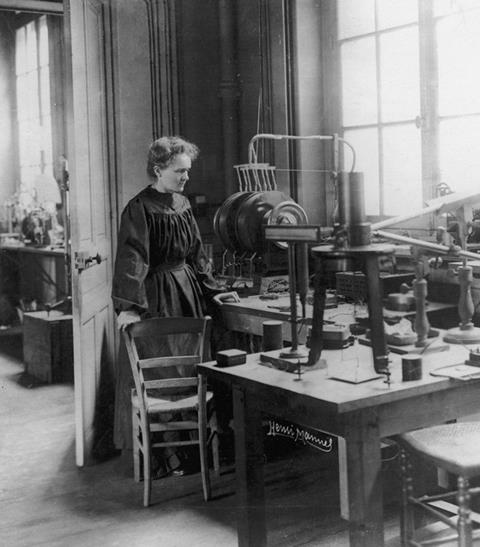 We need to talk about the lack of women in the history of science. I hope it’s fair to say that everyone recognises the problem. The question is what to do about it.

We can’t simply roll our eyes and say that’s just how things were back then, since that implies we’re past it now. Sexual harassment and discrimination in science are still with us1 – it’s just that now they are often more subtle, and therefore in some ways harder to deal with. (Although not always: a recent incident in which a referee for PLoS One suggested that the female authors of a paper should recruit male coauthors to avoid drifting towards ideological interpretations tells us only what we should already know: having stupid opinions doesn’t stop you becoming a scientist. That a journal editor would pass such a remark on without comment, meanwhile, suggests a more disturbing level of institutional blindness to sexism.)

But we don’t seem to have found good ways to confront the historical imbalance – our efforts so far suffer from either overemphasis or overcompensation. For example, Marie Curie’s achievements in the face of challenges both scientific and social were astonishing, but relentlessly marketing her as a role model risks becoming counterproductive.

And while prejudices faced by women in science well into the late 20th century often led to them being  undervalued and sidelined, exaggerating their role does not redress the balance. The emerging cult of Ada Lovelace as the alleged co-inventor of Charles Babbage’s difference engine seems no more illuminating than claims that Albert Einstein’s first wife Mileva Maric invented the theory of relativity.

Neither does it mean the story of female scientists must always be that of a genius ignored by the patriarchy and now in need
of rehabilitation.

The archetype for this narrative is of course Rosalind Franklin, archly dubbed ‘the Sylvia Plath of molecular biology’ by biographer Brenda Maddox.2 Franklin’s early death from cancer completes the romance of the ‘dark lady’, and there is a strong case that she would otherwise have deserved a share of the Nobel prize that went to Francis Crick, James Watson and Maurice Wilkins (although four is too many, of course). But her status as the ‘wronged woman’ derives almost entirely from Watson’s unkind and unfair portrait of ‘Rosy’ in his book The double helix.

That portrayal now seems to haunt Watson, as in justice it should. But the myth around Franklin created largely by her friend and biographer Anne Sayre hardly set the record straight, as even her sister Jenifer Glynn averred.3 Maddox had no time for it, and her admirably even-handed book explained that it was as much Franklin’s upper-class Jewish upbringing that left colleagues finding her aloof and ‘difficult’.

The stories of other women scientists make an even poorer fit to this narrative. As historian of science Thony Christie has pointed out on his blog, Lise Meitner, for one, can’t be shoehorned into such a reductive template.

Certainly, Meitner began her career when attitudes to women in science were often comically absurd, if they were not so appalling. Many academics were convinced that women would undermine the social and intellectual character of universities. Max Planck reckoned that ‘Amazons are abnormal, even in intellectual fields … Nature itself had designated for woman her vocation as mother and housewife.’ Women were not permitted inside the Chemistry Institute in Berlin, allegedly because its director Emil Fischer was convinced they would set fire to their hair in the laboratories. Meitner was given a room in the basement, but forbidden to come upstairs to talk to her colleague Otto Hahn.

Yet Meitner’s contributions to nuclear science were fully acknowledged and respected by her peers even before her crucial role in understanding nuclear fission (even if Rutherford thought, until he met her, that she was a man). Yes, she should have got a Nobel prize for that, but Otto Frisch and Fritz Strassmann were also overlooked in the award, and no one at the time felt the decision was down to Meitner being a woman.4

The ‘Rosalind industry’, like the Curie industry, actually risks consigning other female scientists to the shadows. The Franklin myth, for example, eclipses the probably more substantial contributions of Kathleen Lonsdale, who has no romantic tragedy to her name, as was acknowledged and lamented at the opening of the International Year of Crystallography last year.

Curie, Lonsdale and her friend Dorothy Hodgkin, and indeed Franklin too, all wanted to be judged for their science and not for being ‘women scientists’, let alone feminist icons. Mildred Dresselhaus, a pioneer of carbon science who has just become the first woman to receive the IEEE Medal of Honor (and yes, isn’t that itself a bit shocking?), takes the same view. And that seems the right approach: just tell it how it was. Expose the biases, but don’t build myths around them.

2 B Maddox, Rosalind Franklin: the dark lady of DNA, HarperCollins, 2003