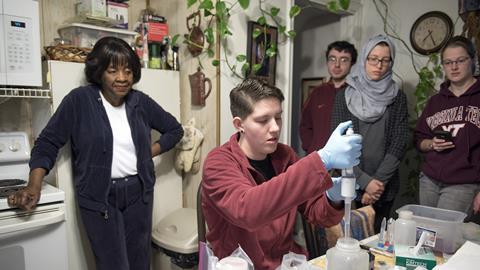 Tapping in to community action

In 2014, the water supply to the city of Flint, Michigan was switched from the Detroit system to the Flint river to cut costs. Improper treatment of the water supply led to issues with water quality and serious consequences for the health and wellbeing of residents.

The water was contaminated, and Flint residents were being poisoned.

Low chlorine levels in the water system led to an outbreak of Legionnaires’ disease that spread to 100 people and killed 12. The contaminated water also corroded old pipes, leaching lead – a neurotoxin that can cause irreversible damage to neurological and cognitive function in children – into the supply. Dangerously high levels of lead have been found in the blood of children from areas where the water was shown to be unsafe.

And one of the reasons we know about what happened in Flint? Citizen science, combined with community activism.

Flint resident LeAnne Walters was one of the first to have high levels of lead confirmed in her home supply after her tap water ran brown. After months of educating herself about Flint water systems, she reached out to Marc Edwards, a professor of civil and environmental engineering from Virginia Tech. Edwards supplied Walters with hundreds of testing kits, so that residents could collect water samples, and agreed to run analyses in his laboratory.

‘Without a citywide sampling event that was led by Flint residents … the Flint water crisis never would have been recognised,’ says Edwards, who was awarded the AAAS Scientific Freedom and Responsibility Award for his collaborations with Flint residents. ‘Without data, you’re just another person with an opinion.’

Edwards explains that the three-bottle testing kit used by Flint citizen scientists was ‘much more sophisticated’ than the one-bottle test typically performed by the Environmental Protection Agency (EPA). The team collected samples when the tap was switched on and then after 45 seconds and three minutes. He believes the data gathered enabled the team to communicate better public health information than the government agencies.

The community leaders of the project displayed fierce dedication. ‘You can’t say enough about how hard they worked and how smart they were,’ says Edwards. The teams not only collected representative water samples, they also implemented safety measures to prevent anyone from tampering with the samples. ‘That became important later, when the integrity of our methods was challenged,’ explains Edwards.

Controls, checks and balances are imperative in all forms of science. Community projects are no different, particularly when the stakes are so high.

While the vast majority of citizen scientists performed their duties diligently and with the highest ethical standards, one resident was found to have deliberately ‘enhanced’ the levels of lead in their drinking water. They reported inordinately high lead concentrations, despite no known lead pipes leading to their property. An investigation revealed that lead fishing weights added to the plumbing had skewed the results considerably.

While shocking, Edwards didn’t find this to be especially surprising, particularly because the crisis ‘put billions of dollars [in compensation] in front of a vulnerable and poor community’. He’s also pragmatic about issues of misconduct in citizen science, as stated in an article he co-authored about the lessons learned from the Flint project: ‘No-one is above the temptation to cheat, whether citizen or scientist … those who view citizens as incorruptible paragons of wisdom and virtue are at least as misguided as those who believe the same of scientists and engineers.’

The experiences in Flint informed the design of a follow-up citizen science project that aims to build a better understanding of the pipes within residences across the US: Crowd The Tap. Led by citizen science expert Caren Cooper from North Carolina State University and funded by the EPA, Cooper says the project ‘promotes access to safe drinking water by assisting individuals and groups in creating inventories of pipe materials that deliver drinking water to homes’.

‘I think that Flint raised a lot of awareness about the fact that lead contamination in water comes from the infrastructure itself. There really is not a good handle on where there are still lead pipes,’ she adds.

The project applies a ‘bottom up’ approach to science rather than the ‘top down’ approach that’s reliant on government agencies to provide testing and data. Participants enter data about their homes, using magnets to identify steel pipes or simple coin ‘scratch tests’ to find lead. The hope is to empower tenants and owners to take steps to improve the safety of their drinking water.

‘A lot of times, data doesn’t speak for itself,’ explains Cooper. ‘So, I think usually it combines well with some sort of community activism.’ And Cooper believes that data and community values, taken together, ‘is what should inform policy’.

All science takes place in a societal context where there are ‘priorities, values and subjectivity,’ but Cooper believes that we can still ‘follow an objective process’ when collecting and analysing data.

I agree – at the confluence of crowdsourced data and activism there’s an exciting opportunity for positive social change.