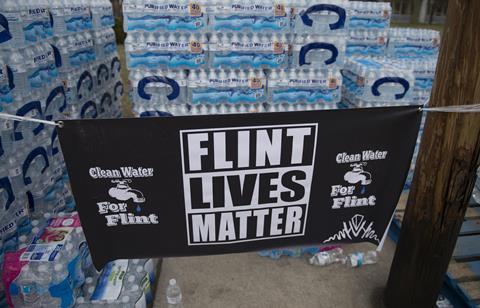 The signs were there – so why didn’t anyone in authority act sooner?

It was during a typical lab exercise in October 2014 that I knew something was really different about our water. Our undergraduate students at the University of Michigan–Flint were making copper sulfate solutions for a spectrophotometry exercise. But instead of clear blue, all their solutions were cloudy, even though we were using water purified by reverse osmosis. I knew that this could be bad: the only insoluble sulfate salts are lead, mercury (I), barium and calcium. It turned out to be evidence of the true nature of Flint’s nightmare.

Six months earlier, in April 2014, the city’s water supply was switched from the Detroit water and sewerage department to the Flint river. There had been immediate public complaints about water quality, and testing revealed unusually high levels of trihalomethanes (THMs) in the supply.

Five days after the switch, our chemistry labs had closed for renovation. After several years of planning and debating every detail, I was super excited when the first labs reopened on 3 September. But there were unexpected problems with the water supply. THMs didn’t explain why we were seeing orange water, with the distinct smell of iron, coming out of our lab faucets. They also didn’t explain the sediment that we saw in our sinks during our first week of labs. We were told that the flaky, spongy rust that was forming due to the acidity of the city water was from sediment sitting in the pipes that was disturbed by the remodel.

Leaks appeared on our brand new ceiling tiles within a month, a result of the water supply pipes being corroded away. I began to worry about the pH of the water when I noticed that my hands were irritated from normal handwashing and that there were multiple reports of city water supply mains breaking within the city. Then came the cloudy copper sulfate solutions, and I knew I had to act.

I took my concerns to someone who I thought may know what was causing this, or could at least inform those working on the water supply about what I was seeing. My concerns were blown off as either a result of the remodel or a side effect of the THM problem. I tried to explain the difference in the way organic materials such as THMs and inorganic metals react and why I thought that there was a 75% chance that there was something really bad in the water. I was quickly shut down and informed that I was just a chemist and not a water quality expert. Imposter syndrome hit me hard and made me start to doubt myself. I convinced myself it was all normal.

Over the next few weeks I got calls about wet floors in the labs, caused by vacuum breakers on our new hood faucets leaking because sediment interfered with the float seal. The cartridges in a new water purification system failed within weeks. The stainless steel water baths of our rotovaps began to rust, as did the new hood foils. The sinks were stained green with copper chloride. But that’s probably just something that happens when lots of copper pipes are installed, right?

I monitored the water supplied to the lab and saw the pH get a little better and then drop quickly. Now the aerators on my faucets were starting to clog, the automatic bathroom sinks would stop running, and the biology department had an autoclave that couldn’t get up to pressure. But this is normal for a remodel, right?

I was so convinced that I had been wrong that I didn’t even make the connection when a few months later the local news featured a woman who claimed lead was in her water. Then one Friday evening in September 2015, I watched a press conference with the health department. Children had been poisoned by lead in the water. Lead, one of the metals that forms insoluble sulfates. Lead that is soluble in hydrochloric acid. Lead that is a neurotoxin.

Unfortunately, it’s not just Flint where lead has contaminated the water supply. It continues to happen repeatedly, even though it has happened many times before, has many symptoms and is preventable. In 2018 a nearby water system left out corrosion control when changes were made to address a PFAS concern, causing another city in Michigan to have the same lead problem for the same reason. How many times does the chemistry need to prove itself before the experts recognise the importance of these chemical systems?

Today, Flint’s citizens are constantly informed that the water now meets safety standards, and as of February 2020, 9516 pipes have been replaced. But all trust has been lost and the three local churches providing water filling stations are a blessing. Homes have been offered point source filters in their kitchens with no way to truly test when the cartridges need replacement. Millions of dollars have been provided to handle the many anticipated health issues and learning differences in those affected. The city has become a testing ground for experiments on mitigating the effects of lead poisoning, but the results will not be available for many years to come.

I want you to recognise the signs to look out for and be ready to act if the water supplies in your communities become contaminated. If there is iron, there could be lead. I saw the evidence with my own eyes (abnormal pH, leaks, sediment clogging equipment, fast corrosion, discoloration, smell) but didn’t trust my chemistry enough to continue to the toxic conclusion. We will never know if things could have been different for this community had I persisted until someone in control listened to me – or to the many others who raised their concerns. I live with that guilt every day. Now, I tell our story as often as possible. Why have the scientific training to observe what others do not, if not to stop disasters and improve the lives of others?