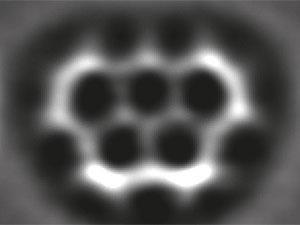 To celebrate the London 2012 Olympics, David Fox and Anish Mistry at the University of Warwick, UK, synthesised olympicene – a polyaromatic hydrocarbon of five fused rings. For maximum impact, they collaborated with Leo Gross and coworkers at IBM’s research lab in Zurich, Switzerland, to obtain a direct image of the molecule using a scanning tunnelling microscope (STM) with a single-atom tip. It’s a wonderful way to weave chemistry into the sporting celebrations. But a timely paper on ‘nanoaesthetics’ by Tami Spector of the University of San Francisco, US, offers an insightful way to think about this work.1

Its heritage can be traced back to 1988, when researchers at IBM’s Almaden Research Center in San Jose, US, reported STM images of benzene adsorbed onto rhodium.2 Here for the first time was something akin to a photograph of a molecule, showing directly that benzene has a ring shape. Of course, no one doubted that: the news was that you could see it with your own eyes.

Well, up to a point. There was a great deal of mediation between the electric current sensed by the STM tip and the fuzzy images in the paper. And the shape had vaguely triangular symmetry as a consequence of STM sensing electronic structure rather than atomic ‘shape’.

All the same, this was rightly seen as a vindication of the STM’s claim to image individual molecules, thereby opening a window on the nanoscale world. As Spector puts it: ‘Benzene is the progenitor, the supermodel, for understanding how chemists mediate, simulate, and aestheticise the unvisualisable, intangible, and ultimately unknowable, nanoworld of molecules and atoms.’

Olympicene shows how far we’ve come. And it’s appropriate that the images were also produced in an IBM lab. Since it invented the STM in the early 1980s, this company has been the source of so much of molecular nanotechnology’s iconography. The Almaden lab’s Don Eigler and colleagues gave nanotech a key icon with their stunning atomic manipulations – producing ‘IBM’ spelt out dot-matrix style with 35 xenon atoms.3 The value of such striking images was appreciated at Zurich too, as for example when James Gimzewski unveiled a ‘molecular abacus’ in 1996: a line of ten C60 molecules pushed one at a time along a step edge on copper.4

While all this is seldom seen as anything more than ‘just science’, Spector offers a deeper reading. The synthesis of olympicene is impressive and pleasing in its own right, yet the molecular structure could have been verified equally well – indeed, more definitively – by x-ray diffraction or NMR. The aim of the IBM contribution was not, however, merely to probe the molecule, but to generate an image: the picture is the product. As Spector asks: ‘Do representations of benzene or benzene itself emblematise its objective, iconic status?’ The iconic status of the benzene ring is distinct from the clear liquid that is benzene (which looks like any other clear liquid).

This is not just some arty attempt to complicate a simple scientific fact. Consider, for example, the celebrated synthesis by chemists at Rice University in Texas, US, of ‘NanoPutians’ – molecules that look like people.5 Of course, the molecules themselves don’t look that way, but their conventional representations do – and that’s what counts here. In other words, molecular structures are not mere signs that encode underlying form, but symbols that create associations. For olympicene, it matters not that it share the formal topology of the Olympic rings – as the five-ring catenane olympiadane6 does – but that it looks like the Olympic symbol – as the 3D structure of olympiadane does not. And if you want further evidence that appearance tells the story, consider the sniggers that greeted the noncovalent coupling described by Toma et al (the graphical abstract says it all).7

All this bears on an issue that has seen little explicit discussion until a conference on the subject was held last year at the Karlsruhe Institute for Technology in Germany: molecular aesthetics. As philosopher of chemistry Joachim Schummer has pointed out: ‘It is the molecules’ (or more properly, their visual representations) ‘for which claims of beauty and artistic creativity are justified, no matter what sensual qualities the corresponding materials have.’ The ‘beauty’ asserted for C60, or even benzene, and the playfulness of olympicene, attach not to the residue in a test tube but to images. For chemists, such assertions of ‘beauty’ are Platonic – they relate to ideas of symmetry and regularity that are mostly absent today from the visual arts.

It’s this aesthetic that has made the hexagonal benzene ring and its permutations so central to molecular iconography. Spector’s discussion reminds us that, when confronted with an image like this, we need to interrogate what we’re looking at: not just to question the physics that generates the image, but to ask what we read into it.