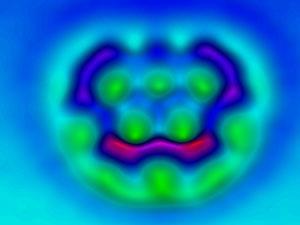 UK chemists have synthesised and imaged a molecule that closely resembles the Olympic rings. While the molecule shows promise for applications in electronics, the project was undertaken principally as a means to celebrate the Olympics coming to London in 2012, as well as encouraging online sharing of synthetic chemistry procedures.

Olympicene, as the molecule has been dubbed, was synthesised by Anish Mistry and David Fox from the University of Warwick. They then handed it over to a team at IBM Research in Zurich, Switzerland to image using a carbon-monoxide tipped atomic force microscopy technique that can show up the structure and bonding in the molecule.

During the synthesis, Mistry posted each of his experimental procedures online at ChemSpider Synthetic Pages, which aims to capture some of the nuances and practical experience of experimental syntheses that are often missing from the procedures outlined in research papers.

Because of the arrangement of its rings, the pentacene molecule is not completely flat and aromatic. However, it can potentially interconvert between a number of different forms, which may give it interesting electronic properties. By plucking off one of the molecule’s hydrogen atoms while inside the microscope, the team did create a flat, delocalised radical. The team now plans to investigate olympicene’s properties in more detail.