Your answers to an iron dilemma, electric car output and whether we need to teach chemists maths

Cooling two vessels containing water to freezing, one hot and the other cold, will produce different physical effects. The hot water vessel will have more defined thermal currents, depending on the rate of cooling and the shape of the vessel. There is also the latent heat of evaporation to take into account, which will be greater for the hot water vessel. It is quite possible that some surface ice would be formed in the hot water vessel, but it is not a universally general result, and surely no experienced chemist worth his or her qualifications would carry out this experiment without vigorous stirring. Assuming both vessels are the same shape, size and contain the same volume of water and are vigorously stirred, there will be no Mpemba effect.

Kit Chapman’s an account of her visit to Dubna’s Joint Institute for Nuclear Research (Chemistry World, January 2017, p22), was fascinating. It took me back to 1951 when Ron Nyholm brought our class to hear Glenn Seaborg speak at Burlington House, London, on his explorations of the first transuranic elements. Compared with the relatively massive quantities of isotopes as targets and projectiles at Dubna, Seaborg told us that in one planned experiment they figured that the yield would be just ‘one full atom’. They nevertheless did the experiment and detected a new element as they had hoped. 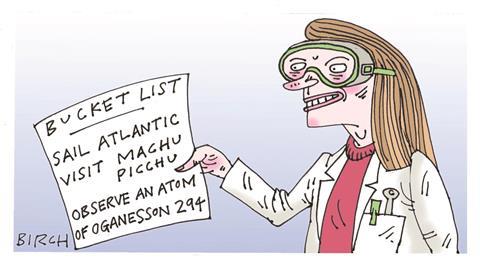 It is astonishing to realise that flerovium has been relatively well characterized (flerovium 289 has a half-life of 2.6s) while only four atoms of oganesson 294 have been observed to date. Whether oganesson proves to be noble gas inert or not remains to be seen, but its naming is clearly well deserved based on Yuri Oganessian’s achievements.

Liquorice is not normally made by boiling up Glycyrrhiza glabra root extract with sugar, flour and gelatine (Chemistry World, January 2017, p52). British liquorice is made by heating treacle, wheat flour, liquorice extract and possibly adding caramel colour. There is no gelatine in the product. Nothing is gained by boiling gelatine, which hydrolyses it and wastes an expensive ingredient. The only gelatine in liquorice allsorts is in the little aniseed-flavoured jelly.

I was delighted to read Sam Logan’s declaration that he is an ‘unapologetic admirer’ of Dorothy Hodgkin (Chemistry World, January 2017, p4). The same is true of me since heard her speak at Leeds in the 1970s. I have studied her biography, Dorothy Hodgkin: a life by Georgina Ferry with much enjoyment. It may be of interest that, as sometimes Nobel laureates are classified according to country of birth, Dorothy Hodgkin comes under Egypt, not the UK – she was born in Cairo in 1910, where her father was working at the time.

I suspect that Roger Newman is correct in assuming that the powers that be have not taken into consideration the extra electricity load electric cars may create on our present output (Chemistry World, January 2016, p4). However, I am not sure that his assumption that the efficiency of such engines are all that much better overall. Certainly, once the electricity is stored in the car the process of converting chemical energy (from a battery) to electrical energy then to mechanical energy is more efficient than petrol engines. However, unless there is a step change in renewables production, the electricity used is mostly going to be from fossil fuel-burning power stations with many more energy steps and transmission losses. Nor has anyone given a figure for how many fewer miles can be covered on a cold snowy night (when the car battery has to provide both lighting and heating) – the latter being something that the waste heat from a petrol engine provides gratis. Another question that needs to be answered is whether the demand for lithium is sustainable into the future if a mass move towards electric vehicles requires its use.

Regarding the mysterious resin explosion event in a steam iron reported by Jim Beston (Chemistry World, February 2017, p4), I would like to suggest what may have happened. I suspect that the resin used might be a in fact a mixture of a cation exchanger, such as sulfonated polystyrene, and a weak base resin, such as polystyrene-bearing amine groups. If such a resin mixture was left damp and exposed to the air for a long time – as it would have been while stored in Beston’s shed – then it could absorb carbon dioxide. When the salt was added, the reaction of the sodium chloride and the cation resin would form hydrochloric acid, which would have liberated the carbon dioxide from the anion resin.

Some years ago, while visiting a nuclear power plant, I was shown a purification system for the light water reactor based on ion exchange resins. It had a very clever feature: the final water polishing used a mixed bed of cation and anion resin pellets. These had a different density, allowing them to be separated and therefore regenerated with two different solutions.

I think that a steam generator in a power plant, a boiling water reactor or even a steam iron should not be fed with soft, but rather deionised, water. It is very important to make sure that chloride is removed as even small traces will greatly accelerate the rate at which stainless steel corrodes.

Thank you for the answer you provided. The fact that my resin bed might be a mixture is a possibility, although I have found not found this arrangement in existing products. Certainly, given that I had a mixture of ‘new’ and exhausted resins, had the former been in the H+ form then hydrochloric acid could have been released and would have displaced any carbon dioxide from any carbonates or bicarbonates present quite vigorously.

I also agree with Foreman that the complete demineralisation of water for use in power plants, where steam temperatures and pressures are extreme, is essential. As I recall, mains water is first passed through a bed of strong acid resin, which adsorbs metal ions like Ca2+ and Mg2+, and replaces them with H+, meaning any effluent is acidic (largely carbonic acid). As it is wasteful to use a strong base acid to remove this, a weak base resin is used to remove the ‘stronger’ anions and the carbonic acid is very largely removed by allowing the effluent from the weak base bed to fall through some form of packed column against a counter-current of air, thus stripping out carbon dioxide. The ‘final water polishing’ Foreman refers to, where the water is next passed through a mixture of strong acid and strong base resins, removes virtually anything left, including silica. The removal of the latter is very, very important as it can deposit on turbine blades causing all sort of problems.

I have taken the liberty of attaching a photo of a lab-scale (20–25l/hr) demineralisation plant that I set up in the laboratory of the now-decommissioned Deptford Power Station in the early 1960s. The flow of water is from right to left through four columns: strong acid, weak base resins, a column packed with Raschig rings with a little air pump below to displace the carbon dioxide, and finally a mixed bed of strong acid and base resins. One of these latter resins is dyed, so that when they are separated, by a gentle upward flow of water, the interface can be seen.

Finally, I am very much aware of the corrosive effect chloride ions can have on stainless steel in power plants. However, these operate at very high temperatures and pressures and I would venture (and hope) that chloride corrosion in a domestic steam iron would be somewhat insignificant. No sign of scale on ours so far!

After reading Kit Chapman’s editorial on whether A-level maths should be a prerequisite to starting a chemistry degree (Chemistry World, October 2016, p60), I thought I would relay my own experience. If my had undergraduate chemistry course of choice required a maths A-level, I would not have become a chemist. As it is, I have defended my PhD and become a cheminformatician – one of the more maths-heavy domains in chemistry. This was a significant stretch for me, and I don’t feel the support that was offered necessarily compares favourably with the A-level maths. Nevertheless, maths skills can be learned without the need to push this issue further down the system.

Having just finished a teaching position at a liberal arts college in the US, I can say that forcing early specialisation onto young people does not necessarily do them any favours, while having a breadth of skills certainly does – especially for relatively new fields. Perhaps those who claim otherwise would like to hear from my computer science students about the dangers of premature optimisation.

If we maintain that we are teachers of chemistry, let us teach chemistry, maths and all. Elsewise, we are simply trying to make our problems someone else’s responsibility.

I am sure Sarah Houlton’s article on DIY chemistry (Chemistry World, December 2016, p21) brings wonderful memories to those of a certain age, whose interest and love of chemistry was (literally) sparked by chemistry done at home. However, I offer a word of caution to anyone attempting similar experiments today.

At present, I am an expert witness to the courts of Australia for a variety of chemistry related matters, including drugs of abuse. A while ago I gave an opinion for a case in Victoria, for a man who had set up a wonderful home lab but who had fallen seriously foul of the Australian drug laws. The trouble is that almost any reagent or piece of equipment can be used for illegal purposes – for example metals such as aluminium, iron, platinum all turn up in recipes for reductive amination en route to amphetamines. Under our law (in Australia each State and the Commonwealth all have separate legislation), equipment including round bottom flasks, condensers, heating mantles, separatory funnels can be ‘prescribed equipment’ for which the onus is on the defendant to show a legitimate use. This is all very tricky for the hobby chemist.

The defendant was accused of possessing the drug precursors nitromethane, iodine, palladium and magnesium, along with various items of equipment. He claimed he was performing experiments such as making ‘elephant’s toothpaste’ with soap, iodide and hydrogen peroxide; trying to plate chromium extracted from steel; and making biodiesel. No drugs were found on the premises and there was no complete set of chemicals for making any particular drug.

I did not have to go to court but I understand there was a ‘good outcome for the client’. However, this was a traumatic experience for the man, a long drawn out affair on the public purse (he was supported by Legal Aid), and no doubt put a dent in his enthusiasm for chemistry.