Chemistry is full of strange observations and puzzling behaviour. Sulfur, for example, never ceases to delight me: a yellow powder that melts first into an orange liquid, and then into a viscous red treacle that cools to a yellow gum. Simplistic explanations involving rings opening into chains will do little to reassure critical observers. 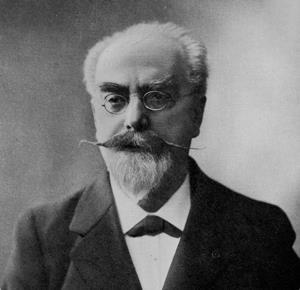 Even more uncanny is an observation made by William Henry in 1800: when a voltage is applied to a mercury electrode in sulfuric acid, the liquid moves. And stranger still, a drop of mercury in the same solution comes alive when touched by a nail or an iron wire. It twitches rhythmically, defying all common sense; an automaton driven as if by magic. Such strange behaviour is bound to attract attention, and when Gabriel Lippmann saw it around 1871, it changed his life.

Lippmann was born into a bilingual German·French family somewhere near Luxembourg in 1845. His parents moved to Paris where he entered the prestigious École Normale. He was a patchy student: obsessed by what took his fancy, while ignoring things that bored him. The result was that in spite of an encyclopaedic grasp of large areas of chemistry and physics, he failed the examinations that would have secured a ‘safe’ teaching job.

But the vice-rector, Pierre-Augustin Bertin (an ex-classmate of Louis Pasteur’s) spotted Lippmann’s unusual talent and gave him a job writing abstracts of German articles for the Annales de Chimie et de Physique that Bertin edited. This led to a scholarship to visit German institutions.

In Heidelberg, the physiologist Wilhelm Kühne showed Lippmann the mysterious mercury droplet demonstration. Almost without hesitation, and probably thanks to his wide reading while working for Bertin, Lippmann concluded that this must be due to the interplay of surface tension with ‘polarisation’ (the chemical potential). This led to a stay in Gustav Kirchhoff’s laboratory.

Kirchhoff had all the latest kit, including a quadrant electrometer, the sensitive device invented by William Thompson (later Lord Kelvin) to measure electrical charge. Lippmann carefully measured the changes in charge when a thread of mercury moved in contact with sulfuric acid – the charge depended not on shape, but on the surface area. Using a battery, he could move the mercury back and forth in a fine capillary and showed the equivalence of applied pressure with voltage.

This led him to design a simple electrometer – a glass tube filled with mercury, whose bottom was thinned down to a fine capillary just 50µm across. The capillary end sat in a solution of sulfuric acid and, on applying a voltage, the movement of mercury in the capillary could be observed through a little microscope, allowing exquisite measurements: to within 0.1mV. Lippmann also designed a motor that was driven by the alternating movement of pools of mercury, demonstrating that the electrocapillary effect could be harnessed at the macroscopic level.

His work earned him a PhD from Heidelberg in 1873 and he quickly wrote up communications in French and German. His work was, however, disputed by the physicist Georg Hermann Quincke who was convinced that the observations were the result of contaminants on the mercury surface.

The simplicity of his device, and the ease with which it could be calibrated, meant it caught the attention of chemists and physicists across Europe. In particular, Wilhelm Ostwald, refined the device and used it extensively in developing Walther Nernst’s theories of electrical potential. Later, Jaroslav Heyrovský would develop polarography based on Lippmann’s capillary.

Lippmann was promoted to a series of professorships in physics at the University of Paris, eventually becoming head of the research laboratory at the Sorbonne. He moved on from electrocapillarity to other interests, and mostly towards developing colour photography, for which he would be awarded the physics Nobel prize in 1908.

The beating mercury droplet retains the near magical wonder today that it would have done two centuries ago. To use the chemical educator Bassam K Shakashiri’s memorable expression, it is one of the most ‘exocharmic’ of chemical processes – having the capacity to astonish an audience.

Today, it has inspired the field of electro-mechanochemical devices that mimic artificial muscle. It is also further proof of Arthur C Clarke’s third law: any sufficiently advanced technology is indistinguishable from magic.