Social cartography as a tool for locating sources of pollution 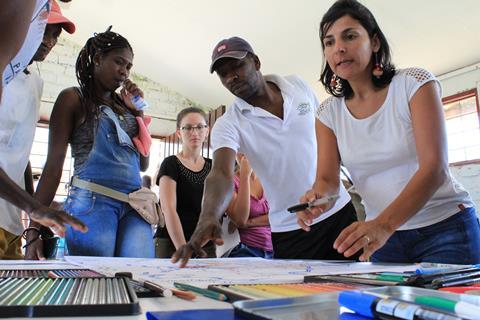 In May 2016 Irene Vélez-Torres received a series of alarming telephone calls from residents of the Colombian village of Yolombó, a community of afro-descendent people 100km north east of Medellin. Huge numbers of dead fish were floating in the Ovejas River, a major source of food, and the community wanted to understand what was happening.

‘I did my PhD in that community,’ explains Vélez-Torres, a full professor at the Universidad del Valle in Colombia, who lived in Yolombó for almost a year in 2011. ‘I became part of the community, kind of … it was very, very close and we shared a lot.’

Since completing her PhD, which focused on mining, extractivism and its impacts on the forced mobility of people, Vélez-Torres continued to return to the community and to update them on her academic role as a social scientist in the School of Natural Resources and Environmental Engineering.

‘When they saw the dead fish, they called me to see if I could do something; if I could help them, more like as a friend who has good contacts,’ she explains. ‘They didn’t know that it was related to mining, they just saw the fish and they were wondering, what could that be?

In a bid to uncover the cause of the sudden and massive fish death, Vélez-Torres called upon the expertise of her colleague Diana Vanegas, an assistant professor at the School of Food Engineering, and the two researchers travelled together to Yolombó. Following discussions with people in the village the duo traced the route of the river back towards its origin, and along the way uncovered a more sinister source – the one thought to be responsible for the death of the fish.

Vélez-Torres was taken aback by the changes to the gold mining industry since her PhD.

‘The mines that we saw that first day were different from the mines I had been studying before,’ she explains. ‘When I was living there the [gold] mines were all traditional mines that didn’t use mercury or cyanide, but in four years … all the local setting of the gold extraction had changed. There were new people and there were big establishments, and they were using these substances that we came to know were mercury and cyanide.’

Despite government regulations limiting the use of mercury in Colombian mines, its use persists despite the huge cost to the environment and health of local people, as it can significantly increase the quantities of gold extracted. 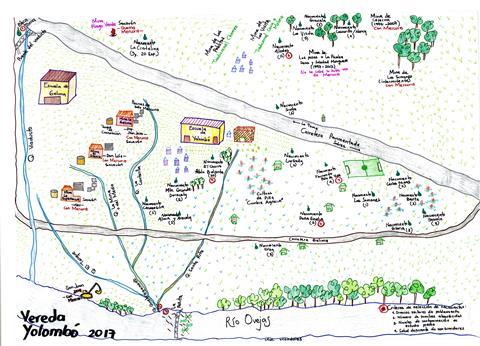 A mapping exercise allowed local women to share their knowledge of the local area, helping to identify locations for water testing

Without funding for their research, the team wasn’t able to pay for expensive laboratory tests and instead opted to test the water using commercial strips that change colour above a known threshold of ionic mercury concentration.

But first, the team needed to decide where testing would take place.

Vélez-Torres recognised early on that collaborations with the community were integral to understanding and addressing the problems posed by the change in mining processes, and that in particular partnership with women from the community was central to their success.

One part of the research applied a social cartography technique. 80 local women were presented with printed maps of the area and asked to annotate them. Together, the women marked all the mining sites, indicated differences in mining practices on each site and identified whether each mine was run by local people or companies from outside the region. This mapping exercise enabled the team to prioritise locations for water testing.

Samples were taken from the priority sites along rivers and from inside wells supporting families in the community. At several sites, the strips indicated levels of mercury far higher than the maximum concentrations permitted in Colombian legislation.

When results were presented to the community, the researchers took great care to explain the limitations of the results and the need for laboratory screening to more accurately confirm the findings. For Vélez-Torres this ongoing communication and transparency is integral to the ethical framework of the research and continuing partnerships with the community, which are key to answering further questions about the health of the people of Yolombó. Community concerns were starkly expressed at the results workshop, with several women highlighting the possibility of alarming causal links between pollution from the mines and human health:

Vélez-Torres continues to research with the people of Yolombó and is set to focus in on the human impacts of mercury contamination and possible exposure through food in addition to water.

The community called, and Vélez-Torres listened.