While you may not need differential calculus every day, mathematics is the basis of scientific thinking, says Derek Lowe

It’s time for another awkward confession. I’m not great at maths. If you’re going to have a career in science, one thing that’s drilled into you is that you have to have a solid background in mathematics. It’s the foundation, the matrix, and as students work their way up through calculus, linear algebra, differential equations and the like, they know that they’ll be using these skills if they find employment in research labs. 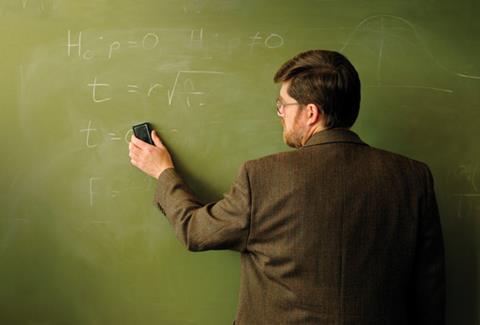 Except, well … here I am, a medicinal chemist, in the business over 25 years now, and (deep breath) I hardly ever seem to use any of that stuff. I go through long stretches of work where it seems like all the calculations I need for my job could be accomplished on an abacus. I feel somewhat guilty about this, because I actually did learn a reasonable number of mathematical techniques at one time. But looking back, it seems as if the last time I used most of them was when I took quantum chemistry in graduate school. Mind you, that was enough to last me a while – one evening after grinding through a long problem set, I was trying to get to sleep when I realised that my brain, annoyingly, was still working integrals, and did not seem to respond to my increasingly heartfelt requests for it to stop (I did eventually get to sleep, and was relieved to find on waking that I was no longer doing involuntary particle-in-a-box calculations).

Whether you use it or not, the ability to learn mathematics may be a good proxy for scientific proficiency

But in drug discovery, at least in my end of it, mathematics just doesn’t seem to figure in very much. Proportions of reagents, reaction yields (when I care): these are simple calculations indeed. We spend more time trying to grasp things that are very difficult to render into equations – structure–activity relationships, potential new reactions and the compounds they might make, the toolbox of techniques we use to try to improve metabolic stability or avoid some toxic side effect. No medicinal chemist I’ve ever met thinks of these things in terms of mathematics, any more than a top-level chef does when assembling a varied and tricky menu.

I recognised some of this when I read Edward Wilson’s recent Letters to a young scientist. He confesses that he has no particular mathematical ability, and not very much training, either. He advises students that many fields of science do not need as much of either as people imagine. And he took a lot of criticism for that, but it is only partly deserved. I think he has a real point, but there’s another effect that has to be considered.

That’s the fact that all of us in science have, perforce, had some mathematical training, which is now a fundamental part of our thinking. Medicinal chemists (just to pick one example) casually handle all sorts of graphical presentations of data, mentally adjusting for log scales, looking for linear and non-linear effects, and immediately grasping when an assay curve looks strange. We watch for outliers, for sample sizes, and for error bars. Most of us have forgotten how foreign these skills are to someone who truly knows no mathematics at all. So even if we might be nonplussed to be handed a second-order differential equation to solve, the mathematical way of looking at the world is still a fundamental part of our thinking (and, I suspect, of Wilson’s thinking as well).

So even though the techniques gleaned from a mathematical training aren’t an absolute requirement, the mental furnishings it gives you may be. I would not wish to be graded at the moment on something as simple as a problem requiring integration by parts, but I think about slopes and areas under curves all the time when I’m looking at fresh assay data. My ability to do my job would certainly be impaired if I didn’t, even more so if I couldn’t. And that’s an even deeper question: whether you use it or not, the ability to at least learn useful levels of mathematics may, in fact, be a good proxy for basic scientific proficiency. That’s my own guess – if anyone has any good counterexamples, I’d be very interested to hear them.