Of atoms and aesthetics

Molecular aesthetics means many things to a few people. For some of those few it means tangible aspects of compounds and their laboratory transformations; for others, historical depictions of chemical apparatus; for others yet, the ways that chemists represent molecules. 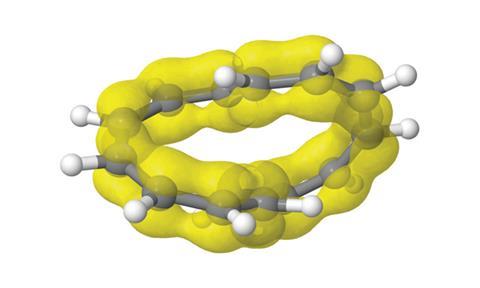 As an organic chemist, swimming daily in a sea of molecular structures, my focus has always been the latter. And for chemists generally, those valence structures of molecules go beyond mere heuristics – they have become embedded with layers of theoretical content that give rise to new science and feed our aesthetic impulses. Quantum mechanics may now inflect our comprehension of chemistry, microscope technologies can capture ‘images’ of molecules, and computations yield precise renderings of complex biomolecular systems, yet chemists still imbue these ‘simple’ black and white drawings with special aesthetic status.

What does it mean when a chemist says a molecule is beautiful, or a synthetic pathway elegant? Why is it that line-drawings of a nanocar, a buckyball and the ‘Mona Lisa of organic chemistry’, cyclobutadiene,1 charm us? These questions might appear ancillary to the doing of chemistry but understanding when and why chemists apply aesthetics to their schema reveals a deep connection to their work that goes beyond pragmatic or epistemic motivations.

In 1988 Roald Hoffmann wrote Molecular beauty, the seminal essay of chemical aesthetics, beginning his long enquiry into the nature of representation and aesthetics in chemistry. Hoffmann legitimised the study of molecular aesthetics and gave it grist.2 In 2003, following Hoffman’s lead, Joachim Schummer and I co-edited two special issues of the journal HYLE on aesthetics and visualisation in chemistry, and this year Peter Weibel and Ljiljana Fruk published their comprehensive edited collection, Molecular aesthetics. These publications, among others, have grafted a new branch onto the tree of scientific aesthetics.

Werner Heisenberg linked scientific beauty to mathematical abstraction, but this notion cannot account for the aesthetic that governs molecular forms. Similarly, many invoke symmetry as a primary characteristic of scientific aesthetics, yet this idea limits and fails to define molecular aesthetics as a whole.

What does it mean when a chemist says a molecule is beautiful?

Plato’s ideal forms have also been used to apply symmetry to molecular beauty, but more accurately, it is the reiteration of forms in the macroscopic world from the unseeable universe of molecules that evokes Plato’s aesthetic. Schummer aptly comments: ‘It is not the molecules but their graphic representations’ say, in images of fullerenes as soccer balls, ‘that bear a certain tension in that they refer both to the chemical world of molecules and the world of ordinary life.’3

Aesthetic properties also inform chemists’ mechanistic conventions – in the parlance of chemistry, ‘elegance’ expresses aesthetic appreciation of synthetic pathways. Typically, we ascribe elegance when the synthetic design appears to circumvent labour, for example an intramolecular cascade reaction that creates multiple rings from an acyclic starting material. Laborious functional group manipulations, on the other hand, would not be described as elegant.

The aesthetic excitement of an elegant molecular process is heightened by our ability to contemplate fugitive molecular objects. Consider the reactive intermediates we sketch in our mechanistic pathways, or unstable systems like cyclobutadiene and transition states, or visually rendered molecules that have yet to be synthesised. As Pierre Lazlo writes, images of fleeting chemical systems turn ‘time into a picture of space.’4 My colleagues, Claire Castro and William Karney, have spent years computationally stalking the wilds of Möbius (aromatic) annulenes – systems laden with the richness of molecular orbital theory, yet, despite numerous efforts, never experimentally isolated.5 These are quintessentially elusive molecules; purposeless but topologically fascinating. The elegance of Castro and Karney’s calculated Möbius minima, structures that capture a moment of stability in the transformation of one annulene isomer into another, echoes their allure as a synthetic challenge.

The aesthetic value of molecular forms transcends their actual utility. Like Keats’s Grecian urn, whose ‘silent form, dost tease us out of thought/ As doth eternity,’ our contemplation of the object, our sense of deep perception moves us – not the urn’s ability to hold water. We admire the ingenuity of chemists who have derivatised fullerenes into semiconductors, but what teases us out of thought is not the application, but our image of fullerene encapsulating a single water molecule, or of transient Möbius molecules ‘captured’ en route from annulene to annulene: the frisson of fugitive moments ignites our aesthetic desires.

Tami Spector is a professor of chemistry at the University of San Francisco, US

Read more in our chemistry and art theme issue