Oh what a surprise! 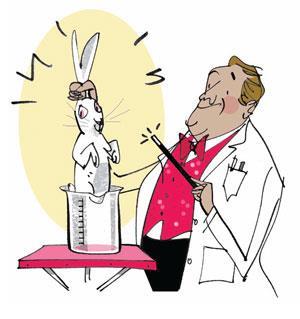 The greatest of all chemical surprises occurred in 1669, when the alchemist Hennig Brand was heating urine with sand to make gold. The old ‘doctrine of signatures’ gave this crazy experiment a sort of alchemical sense: urine and sand are both yellow, and gold is yellow too.

Urine contains sodium metaphosphate, and at a high temperature its organic components char to carbon. If hot enough, that carbon will reduce some of the phosphate to phosphorus. Brand kept his methods secret; but in 1680 Robert Boyle published a recipe for making phosphorus by heating urine with sand. This total chemical surprise, the finding of a new and remarkable chemical element, must be the greatest achievement of alchemy.

These days, phosphorus is made by reducing a phosphate with sand and coke in an electric furnace at about 1200°C. The silica in the sand reacts with the phosphate, giving P2O5; the carbon in the coke reduces the P2O5 to elemental phosphorus.

Again, consider the slow development of chemical photography. By 1835, the Frenchman Louis Daguerre had devised a copper plate coated with silver, polished, and treated with iodine vapour to make it slightly sensitive to light. Daguerre put an exposed plate in his cupboard; and when he looked again there was an image on it! He hunted around in the cupboard, and found a broken mercury thermometer. Its mercury vapour had developed the image. By 1837 Daguerre had produced a useful ‘Daguerreotype’ photographic system. It needed minutes of exposure, but then its metallic plate could be developed by mercury vapour, and the image stabilised with salt water. Modern chemical photography can make a good picture in a few milliseconds, but many original Daguerreotypes are still cherished and admired.

Stainless steel was another chemical surprise. In about 1910, the British metallurgist Harry Brearley was exploring alloys for rifle barrels. As each alloy failed his tests, he threw the dud sample into a damp corner of his laboratory, where it rusted. Looking one day at his pile of failures, he was surprised to notice one that was still bright! He pulled it out and analysed it – it was the first stainless steel. Brearley got a private contractor to make it into domestic cutlery. The new alloy took off; and we are now so used to stainless steel cutlery that we forget the vast past effort needed to keep knives and forks bright and rust-free for the table.

In the early 1930s, ICI researchers were studying high-pressure chemistry. Eric Fawcett and Reginald Gibson were aided by a Dutch high-pressure expert, Anton Michels. In 1933, they tried to react ethene with benzaldehyde under thousands of atmospheres. They hoped for ethyl phenyl ketone, but noted instead a small amount of a ‘waxy solid’ – an unexpected polymer of ethene. ICI later announced the discovery at an international Faraday conference, but (luckily for the company’s patent position) Hermann Staudinger dismissed it, and nothing was published. In late 1935, ICI tried again, using ethene alone, and got 8g of the new polythene. By good fortune, enough oxygen had leaked into the ethene to catalyse the polymerisation. Polythene became a crucial insulator for British radar during the second world war. Other catalysts that worked at lower pressure were ultimately found. Polythene is now a mass produced polymer.

So stick with a chemical surprise. There is a small chance that Mother Nature (who is cleverer than any of us) is removing one of her veils!