I once put an open tube of striped toothpaste in the road and drove over it in my car. I wanted to see whether rapid fluid flow would scramble the stripes. It didn’t. A slug of expelled toothpaste did indeed hit the fence at the side of the road; but when I got out and examined it, it was still clearly striped. This somewhat mad experiment was part of my scientific work for a television company, when I wanted to get fluid flow into a popular science programme. This is easier said than done – I knew any demonstrations would have to avoid obvious lab chemicals such as the viscous liquid glycerol, because a mainstream audience would know nothing about them. 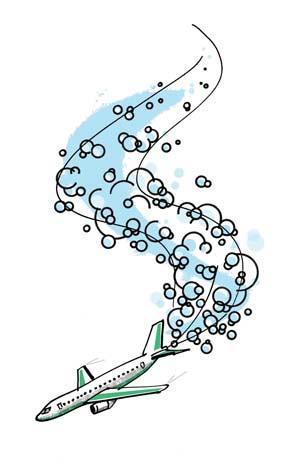 I turned instead to a liquid that would be more familiar – golden syrup. I noticed that when heated in a saucepan the syrup always broke up into a system of thermal cells. I could not predict their size or shape but they always formed, and I knew they would be an excellent starting point for a TV item about fluid flow.

Next came the challenge of making the cells easily visible to a TV camera. I proposed to suspend a little aluminium powder in my syrup. Its tiny flat plates would make the cells themselves shiny, and the boundaries between them dark. But I soon ran into trouble – it turns out aluminium power and golden syrup just don’t want to mix! The powder sits on top of the syrup and refuses to be stirred in. In the end I devised a way of mixing the two. I suspended my aluminium powder in a few cubic centimetres of water containing a dash of detergent. It formed a splendid metal suspension. Then I added golden syrup, ultimately litres of it. I stirred the whole volume vigorously, and got a delightful suspension of aluminium powder in golden syrup, though one with many air bubbles, which I left to rise out overnight. The resulting aluminised golden syrup seemed ideal. I played around with it, and developed some worthwhile TV demonstrations. I made up about five litres of syrup and put it in a plastic carton, to be sent to the television company by air freight.

Then I remembered a story my father had told me, about an advertising campaign for shampoo. At the last moment, somebody decided that they needed more sachets of shampoo. So a big carton of sachets was rushed out to the campaign region by air freight. Now a freight aircraft is not pressurised. As it climbed to operating altitude, the air pressure inside it dropped, and the sachets expanded. Many of them burst and released copious amounts of foamy shampoo. The carton was merely cardboard. Even if it was whole to start with, it would have split under the internal expansion of the sachets. One of the flight crew glanced back, and saw a mass of expanding foam advancing on them from the cargo space. The plane radioed an emergency and put down hastily at the nearest airport.

This story worried me. My carton was like a huge sachet; if it burst it could spread aluminised syrup everywhere! I got a plastic carton similar to my previous one, fitted it with a pressure-gauge, filled it with a mixture of water and dry ice to develop internal pressure, put it a safe distance away and studied it through binoculars as the pressure built up. As the carton survived this treatment I was convinced that the stress of air freight would not burst it. Mercifully, I was right – and the TV demonstrations worked.