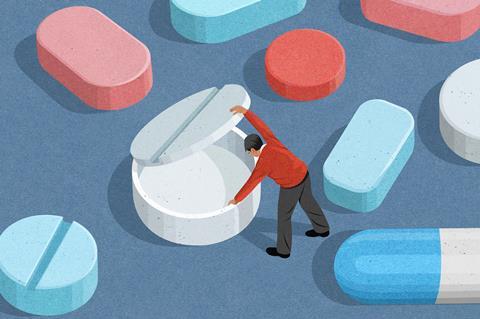 Creating policies on scientific and medical issues is not an easy task. Often, decisions must be made when scientific knowledge is uncertain, and so a policy may be based on false hypotheses. Ideally, any dubious hypothesis is disproved by emerging evidence, but situations can occur where institutional inertia and dogma allow the policy to remain in place. An example of this can be seen in the suggestion that sulfonic acid salt drugs may be unsafe.

Over half of the top prescription drugs are presented as salts in order to optimise their pharmaceutical properties. Sulfonic acid salts such as mesylate (methanesulfonate) often provide the best technical solution, although hypothetical safety concerns were raised nearly 20 years ago.

In late 2000, the European Department for the Quality of Medicines (EDQM), secretariat to the European Pharmacopoeia, suggested that an ester-forming side-reaction could occur during the synthesis of a mesylate salt by addition of methanesulfonic acid to a pharmaceutical base dissolved in an alcoholic solvent such as ethanol. Thus, a toxic alkyl mesylate (ethyl methanesulfonate; EMS) might be present as an impurity in the mesylate-salt drug substance.

In 2004, the European Pharmacopoeia (EP), introduced a new requirement for any EP-compliant mesylate salt drug substance: the potential for alkyl mesylate formation should be determined, and is ‘particularly likely to occur if the reaction medium contains lower alcohol’. Although supportive evidence was not provided, at the time no objections were raised by industry scientists given the perceived expertise of the EP. Introduction of the policy would have been considerably more problematic if EDQM had released analytical data, obtained as part of a 2002 MSc project, demonstrating the absence of alkyl mesylates in a range of mesylate salt drug substances. Nevertheless, the concept was rapidly taken up by other regulatory bodies including the European Medicines Agency (EMA).

The EP’s policy appeared to be justified three years later, when patients using certain batches of Viracept (a protease inhibitor whose active ingredient is nelfinavir mesylate) complained of a strange taste attributed to the presence of around 0.1% EMS. However, the contamination was caused by a gross failure of good manufacturing practice (GMP): methanesulfonic acid reagent was stored in a tank containing residues of ethanol, leading to production of EMS. In addition, the isolation procedure for the drug substance involved spray drying, which prevented the possibility of impurity purging.

Despite the exceptional circumstances behind the Viracept incident, in early 2008 the EMA launched a survey of all sulfonic acid salt drug substances approved in EU countries along with a range of assumptions that alkyl sulfonate impurities would be found. A report on the outcome of this survey has never been published, but several years later a Freedom of Information request revealed that such impurities were consistently absent. Thus, it is inappropriate and misleading to read across from the unique event of Viracept contamination to the routine GMP synthesis of sulfonic acid salts.

Many process chemists and others in the pharmaceutical industry were concerned that policy (later extended to tosylate (toluenesulfonate) and besylate (benzenesulfonate) salts) was being driven solely by speculation, and so a consortium was formed to investigate the mechanisms and kinetics of sulfonate ester formation. These studies, undertaken at the independent Product Quality Research Institute (PQRI), quickly established that ester formation is extremely slow, even under forcing conditions, and no ester is detected when an equimolar amount of base is present.

In response to the consortium’s findings and several critical publications, the EDQM requested an assessment by an EMA expert group. This review was chaired by a European scientist who was also chair of the European Pharmacopoeia Commission (the decision-making body of the EP) which, on several occasions, has voted unanimously in favour of retaining controls on alkyl sulfonates. The review’s conclusion that ‘the presence and formation of these alkyl sulfonates cannot be totally excluded’ is in stark contrast to the outcome of the PQRI investigations.

Today, manufacturers are required to either analyse drug substances for levels of alkyl sulfonates or to argue on the basis of scientific evidence that they will not be formed. But there is a catch with the latter approach in that both EDQM and EMA have not responded to requests to clarify the parameters supporting such an evidence-based explanation, thus maintaining false perceptions that these impurities might be present. Overall, regulatory policy has perpetuated unjustified concerns about the safety of sulfonic acid salts, possibly leading some drug developers to use suboptimal counterions.

While this is a problem in itself, the history of sulfonic acid salt policy illustrates a wider issue: that it can be incredibly difficult to change direction once a policy has been accepted as the status quo. In an ideal world, chemists should be able to bring pressure to bear on policymakers to ‘follow the evidence’. However, this will not occur until there are significant changes in administrative procedures that increase the openness and transparency of the policy development process. Such changes are unlikely to occur quickly (if at all) in this particular case. In the meantime, individual chemists must continue to alert the broader professional community to policies that are not supported by evidence.