The role of outreach in increasing chemistry degree enrolment 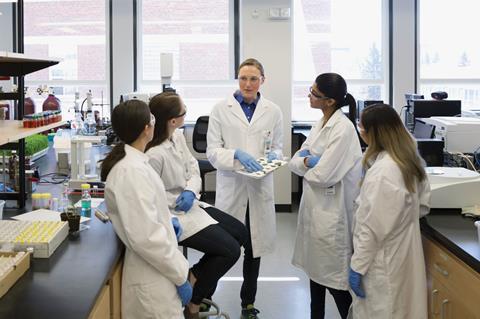 Chemistry may be the central science, but it isn’t a central career focus for school leavers. The number of applicants to chemistry degrees has fallen by 21% between 2015 and 2018 in the UK, despite an increase in the number of students studying chemistry at A-level.

The dwindling figures have caused concerns across a number of chemical companies who have penned an open letter to the UK government, urging it to do more to promote careers in chemistry.

Nimesh Mistry, a senior teaching fellow and schools liaison officer at the University of Leeds, thinks that chemistry outreach also has an important role to play here, particularly if it promotes career pathways in chemistry. ‘One of the reasons why subjects like medicine and engineering do really well [in terms of university enrolment], is that people know that with those degrees you get jobs, and jobs that are well paid,’ says Mistry.

Mistry and his colleagues are trying to shift this narrative by including information about careers in chemistry – even potential salaries – in some of their outreach activities. One of their events Medicine, Not just for Medics, highlights the importance of science subjects for careers that improve human health. Through workshops in areas such as drug design, they hope to promote chemistry and other sciences as university options for students who may otherwise study medicine.

‘We know that there’s a lot of pressure on students who are very bright academically, and are interested in science, but perhaps culturally their families or their schools or their teachers might be pushing them towards medicine,’ says Mistry. ‘Chemistry is an enabling subject. It’s fairly well known that more students who study chemistry at A-level will apply to medicine than chemistry.’

Claire Murray, from the Diamond Light Source synchrotron in the UK, and her colleagues Mark Basham and Matt Dunstan, have developed Diamond the Game – a board game designed to educate students about the variety of career pathways for scientists.

The game encourages players to think about the flexible, interdisciplinary nature of science careers. ‘Players get a flavour of the work of a palaeontologist, of a metallurgist or an aeronautical engineer, rather than just thinking that science works in boxes, because that’s just not true.’

Surveys of students involved in play tests revealed an increased awareness of the importance of collaboration in science and a better understanding of failure from the experiments that didn’t succeed during the game.

The team also explored different ways to make the game, and ideas of careers in science, as inclusive as possible. ‘The icons that you play with are incredibly simplistic, it’s just a head and shoulders and nothing else,’ explains Murray. ‘The idea is that [as a player] you can project yourself onto the scientist that you choose to be.’

Sebastian Cosgrove, a postdoc at the University of Manchester, believes that more inclusive outreach is key to growing enrolments and increasing diversity in chemistry.

‘During my PhD there were only three female professors and maybe one BAME [black, Asian or minority ethnic] professor,’ says Cosgrove. He believes that we need to show that the subject is ‘not just old white men boiling flasks. Outreach is a really important aspect to show that anyone can do chemistry and that the options after the degree are extremely broad’.

Cosgrove adds that outreach needs to go beyond school-centred provision. ‘I think aspirations really do start at home,’ says Cosgrove. ‘If you tell a parent what a kid can do, I think that could really have a significant effect on raising the aspirations of children who wouldn’t think of ever applying to study chemistry.’

Rizwana Alvi, an education coordinator with the RSC, agrees and endorses broadening engagement to both adult audiences and to younger students. ‘A lot of kids decide at primary level whether they’re going to move forward with science or not,’ says Alvi. ‘If we can get them engaged at primary, then we have a better chance of holding on to them through the secondary system.’

Alvi and her colleagues support teachers and empower them to deliver more engaging and innovative chemistry lessons. There are different challenges for primary teachers, the majority of whom haven’t studied chemistry beyond GCSE, so the focus is on confidence-building and introducing basic concepts.

She also believes that the most critical part is contextualisation. ‘Chemistry is a very abstract subject in a lot of ways, and sometimes students can’t see the bigger picture or how chemistry translates into the real world.’