The Nobel prize for…

Winning a Nobel Prize is likely the greatest achievement to which a scientist can aspire. The path to the prize is arduous, requiring exceptional talent, dedication and insight. But there are barriers to winning that have nothing to do with scientific excellence. Instead, they arise from failings in the culture of science – a culture that the prize itself reinforces. 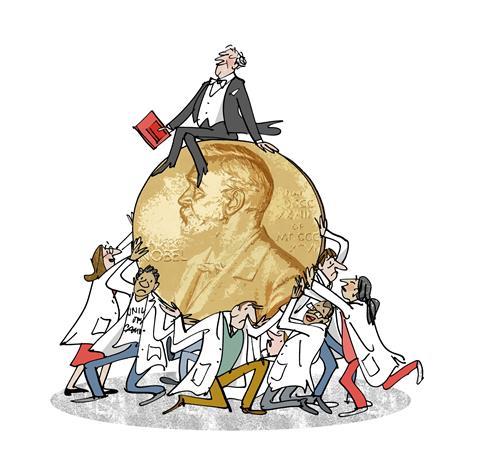 First of all, the Nobel laureates are almost entirely middle-aged white men based in the US or western Europe. You could argue that overwhelmingly, these scientists just happened to do the best research. But the laureates’ homogeneity doesn’t just reflect the lack of diversity among scientists – it reinforces it in a feedback loop. Seeing white men receive the award year after year implicitly indicates that only they can be rewarded for scientific achievement. This leads to systemic bias (conscious and unconscious) against gender and racial minorities at every level of scientific practice, demoralising and driving us out of the community.

The Nobels also promote the idea of individual genius. A glance at the periodic table, a general chemistry textbook or your favourite scientific publication reveals how the contributions of droves of people are often reduced to a few prominent names in their fields. We all know this isn’t how science works – we build upon each other’s research, each individual contributing a small piece of a vast puzzle. Awarding a few individuals damages the culture of research, undermining collaboration and incentivising the pursuit of individual glory. The Nobel committee is charged with awarding the highest prize for scientific achievement; as such, they must lead by example to honour the work of overlooked and underrepresented researchers.

It’s increasingly difficult and hugely unfair to award these prizes to one or two (or three) people. For example, the 1998 Nobel prize in chemistry was awarded to Walter Kohn for developing density-functional theory (DFT) and to John Pople for ab initio calculations in quantum chemistry. However, they didn’t work alone – their collaborators include Lu Jeu Sham, Pierre Hohenberg, Warren Hehre, Leo Radom and Paul Schleyer – not to mention armies of graduate students. None of these researchers received any recognition from the Nobel committee, effectively writing them out of the story of their own work. We see this repeated every year in discussions of which individuals deserve the prize, but there will always be people unjustly left out.

Exclusion is bolstered by an opaque selection process (the Nobel Foundation forbids information about nominees from being released for 50 years) meaning it is hard to know who makes the decisions and why they make them. While incremental measures have been introduced to increase diversity in Nobel nominees (including explicitly requesting nominators to consider gender, ethnicity and geography), gender diversity is the only outcome being monitored. Even then, all nine of the science awards this year went to men – and eight were white and western-based.

While the Nobels currently uphold biases by shaping our cultural image of scientists, their high status also means they can help alleviate these problems. But to do this, they need to change. First, I would like to see an open and transparent awarding process, with plenty of opportunities for the public to have their say. After all, Alfred Nobel established the prizes to recognise work that has ‘conferred the greatest benefit to humankind’; the more people involved, the better we can meet his aim.

Most importantly, I propose that Nobel prizes should honour not the discoverers, but the discovery itself. This would fix the inequities in the award process and transform the Nobel into an award that truly celebrates modern science – by highlighting both the most impactful research and the collaborative way in which it is performed.

Then, instead of giving cash to individuals who likely have more than enough funding, we could use the prize money to increase the participation and retention of under-served minorities in the Nobel-winning research topic. This could be in the form of scholarships for undergraduate and graduate education, funding for student-led diversity organisations, or research fellowships with prestigious labs in that field.

Rather than laureates giving Nobel lectures, how about an open call for speakers who work on that topic? That would give researchers from lesser-known groups the opportunity to present their work. Along with the Nobel banquet, this would provide a valuable networking opportunity for researchers who might not otherwise be able to attend conferences or develop international collaborations.

Alfred Nobel’s belief that scientific research should endure as a force for good in this world is the spirit that drives the Nobel prize. The prize must work towards solving one of our community’s greatest challenges: welcoming people who have never had the chance to participate in science. Change comes from the ground up, and it’s up to the most influential and powerful to set the example.