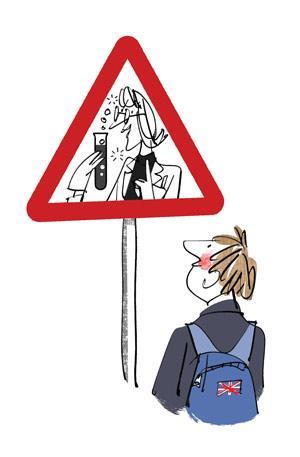 In April 1855 Justus von Liebig made a demonstration of the combustion of carbonyl disulfide in nitrogen monoxide for the German Princesses Therese and Marie, along with the other members of the Bavarian royal family and their noble guests. The reaction, in which nitrogen, carbon monoxide, carbon dioxide, sulfur dioxide and sulfur are formed, creates a small explosion of bright blue light accompanied by a characteristic ‘barking’ sound.

This so delighted the audience that Liebig was asked to repeat the experiment. Unfortunately things didn’t quite go to plan the second time round, as an eyewitness reported: ‘Because of doing it in a rush, uncontrolled sparkles turned into terrible detonation, which crushed the flask…Princess Therese obtained a wound in her cheek. Prince Leopold was wounded on the top of his head.’ The explosive second demo had been, by all accounts, a disaster. But what happened next? ‘The wounds were healed, and we became very popular,’ wrote Liebig laconically about the incident.

Attitudes to practical demonstrations have changed considerably since Liebig’s time. I recently heard about a chemistry teacher who wanted to show her students a benzene reaction, which involved putting a few drops of the liquid in a test tube. After a few days, her supervisor received several complaints from the parents of her students, claiming that she exposed their children to a ‘dangerous’ (i.e. cancerogenic) chemical.

What has happened in the last 150 years or so? It is true that we have become more careful and safety-conscious, and that we know much more about chemical as well as physical hazards. This is, in many cases, a good thing. But it is also true that there is a rising public concern about chemistry, and specifically about chemical experiments, which threatens to erode a crucial part of a good chemistry education.

This lack of experience handling chemicals not only perpetuates the fear, but can cause the science itself to suffer over time. I sometimes find myself thinking that nobody learns practical laboratory skills anymore! I recently came across a question from a colleague on an internet forum asking how to prepare calcium nitrate from calcium oxide. As a middle school student I made such preparations without consulting anybody, not even my chemistry teacher. Worse still, one of our other colleagues recommended direct reaction of calcium oxide with nitric acid on a heating table. He has obviously never seen, and probably never heard of, quicklime (which was speculated to be a key ingredient of Greek fire – the mysterious ‘water resistant’ first century flames used by Byzantine armies in naval battles). In the UK, many have expressed concern over the dwindling importance of practical work in chemistry education – although recent reforms to exams are designed to make them more rigorous, the requirement for practical competence has been almost entirely eliminated.

Thus, ignorance has become the problem, not safety. It strikes me as bizarre that nowadays children are encouraged to take part in extreme sports and adventurous pursuits like mountaineering but forbidden to do ‘dangerous’ chemical experiments. Fear is the daughter of ignorance; the chemical laboratory for some people has come to hold the same symbolic meaning as the dark forest to their Stone Age ancestors. And the tragedy is that it’s actually making the whole business less safe.