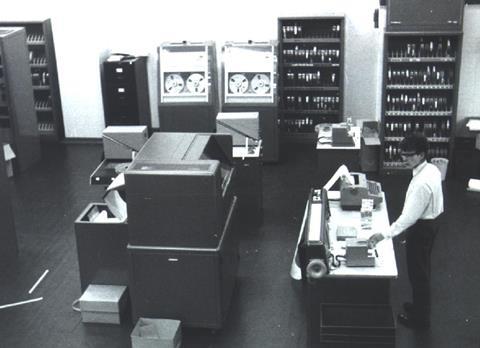 Source: © Department of Computer Science and Technology/University of Cambridge

The University of Cambridge’s Ferranti Titan computer in 1965. A few years later, George Sheldrick would use it to write a preliminary version of SHELX

The term ecosystem has moved beyond the narrow biological definition to something more metaphorical, a space where devices, ideas, data and money swirl in a mostly self-contained set of loops. Within chemistry one man can be said to have created an ecosystem that has transformed the molecular sciences.

George Sheldrick was born in Huddersfield, UK, during the second world war. Although he is said to have been a little slow in school to start with, he become an overachiever who not only gained six A-levels but did so with distinction in maths, physics and chemistry. This led to a scholarship at the University of Cambridge’s Jesus College. When he graduated in 1963, he joined the research group of Evelyn Ebsworth at the university. As part of his PhD, Sheldrick prepared silyl phosphines and arsines, the structures of which were unknown. These were the glory days of ‘d-orbital participation’, that zombie idea that vacant d-orbitals were needed to explain the structure and bonding of the heavier main group elements. Sheldrick’s and Ebsworth’s meticulous symmetry analysis of the vibrational spectra – Raman on the liquid, infrared on the gas – of these two pyrophoric molecules suggested that they were planar.

He submitted his thesis in 1966, remaining at Cambridge as a fellow of Jesus College and a demonstrator in the chemistry department. But some nagging doubt about the phosphine structure led him to contact the crystallographer Durward Cruikshank’s research group in Glasgow. Brian Beagley, a lecturer in the group, had recently built a gas phase electron diffraction instrument that allowed further investigation of the phosphine. It is not entirely clear how the pyrophoric and extremely toxic samples got from Cambridge to Glasgow.

Beagley remembers Sheldrick as being very confident but also rather impatient, disappointed that the data collection and analysis took so long. The result, when it came, was unambiguous: the phosphorus atom was distinctly pyramidal. Their 1968 paper ended with a warning: ‘The structural results do demonstrate the dangers of making geometrical predictions on the basis of the absence of bands in i.r. or Raman spectra, since these may simply be too weak to be observed.’

While in Glasgow, Sheldrick talked to Cruikshank both about the hazards of transporting such hideously dangerous samples across the country and about how the diffraction of crystals might be less nerve-wracking science to focus on. Cruikshank generously shared his notes and his algorithm for doing least squares reduction of crystallographic data, which Sheldrick took back to Cambridge. Back then every computer was different, so Sheldrick needed to translate the method into code that would run on the Cambridge mainframe computer, a Ferranti Titan that used a very low-level language called Titan Autocode. There was one critical constraint: the amount of memory available was extraordinarily small. This meant that the code had to be extremely compact. One consequence was that Sheldrick put no explanatory comments in the code; he also reused variables for different purposes at different points in the code. If it was very efficient, it was also utterly impenetrable.

Sheldrick would become a supreme programmer. Decades later he would wow both students and experienced colleagues with the speed of his data sorting routines that could beat everyone else’s by a factor or two or more.

Crystallography began to take more and more of Sheldrick’s energy. His research group worked on inorganic chemistry. But all the while Sheldrick was assembling crystallographic software routines to do the basic processes of crystallography. When Cambridge replaced the Titan with an IBM 370, Sheldrick’s software needed to be completely rewritten. Filled with horror at the prospect of ever having to do the job again, he translated his code into the more widely used language Fortran, and created a suite of programs to do the data reduction, solution and structure refinement. As his students left to take up positions elsewhere they asked Sheldrick for the code so that they could solve structures without having to learn something new.

In 1976 Sheldrick decided to release his software as a complete package, named SHELX. Available free for academic purposes, companies would pay a modest sum for its use. The money Sheldrick earned from this went into a conference fund for his research group. As the software began to spread around the world, a user group was set up which met periodically to discuss improvements.

When Sheldrick was offered a position at the University of Göttingen, Germany, in 1978, one of his conditions for accepting was that he be given a computer. This caused considerable consternation; after all, the university already had one! In the end Sheldrick got his way. His group quickly got up to speed solving a wide range of crystallographic problems. In an age before computer visualisation, Sheldrick developed routines that would generate printouts of the electron density. The sheets would be laid on the huge table that sat in the centre of his office, with the peaks and troughs in the electron density built up using balls of clay. It was laborious but very informative. The table would later be used for afternoon coffee where Sheldrick would hold court, setting crystallographic puzzles for his students. If they in turn asked him a tricky question, he would sometimes go into a kind of trance – his students said ‘George is re-booting’ – before coming back with some reference or piece of data which he had retrieved from what they said was his photographic memory.

SHELX would go through several iterations. Today, it’s the biggest game in town – free, simple to use and very powerful. By mashing together highly efficient procedures based on his own and others’ ideas Sheldrick created a crystallographic ecosystem, producing a torrent of structural data that we are only just beginning to fathom.

I’m very grateful to Krešo Bučar for the idea and to Brian Beagley, Bill Clegg, Jeremy Cockcroft and Peter Müller for their insights and reminiscences.