How would you like your soup, madam – one lump or two? If you ever had the chance (and financial resources) to dine at elBulli on the Catalonian Costa Brava before it closed in 2011, you’ll know that soup doesn’t always come in bowls. Celebrity chef Ferran Adrià has worked for years to perfect the technique of spherification: encapsulating liquid foods in an edible polymer skin. It is one of the most striking coups of molecular gastronomy – cooking based on advanced chemistry – and I am reliably informed that elBulli’s sphericated olives, made from puréed olive, were out of this world. 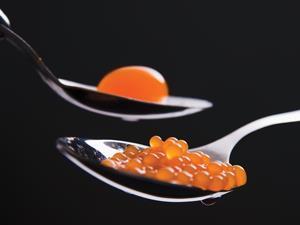 Spherification goes back a long way. It was invented in the 1940s and patented for the production of ‘artificial edible cherries’. Innovative chefs such as Hervé This, the doyen of molecular gastronomy, explored it in later decades. It uses sodium alginate, a natural food thickener extracted from brown seaweed, which is gelated from solution when exposed to calcium ions. The usual method is to place a dollop of the food ingredient, mixed with sodium alginate, into a bath of a calcium salt such as calcium lactate gluconate. As it gels, the blob is pulled into a sphere by surface tension.

Adrià came across the technique in 2003 and began experimenting with it, creating ravioli-like dishes from puréed pea and mango and varying the recipes to tune the texture of the gel. But in 2005, his restaurant’s ‘scientific department’ came up with a new approach that turned the chemistry inside out. Instead of adding alginate droplets to a calcium bath, he began adding liquids naturally rich in calcium (or supplemented with it) into an alginate bath. Within just a few minutes, the droplets develop a membrane tough enough for them to be lifted out gently on a spoon. After rinsing in water, they’re ready to eat: one bite releases a flood of the flavoursome ingredients, whether it’s tomato soup, puréed strawberries or olives. It works for just about any liquid, and is a rare example of haute cuisine that you can do at home – Adrià even supplies kits with all the ingredients.

The basic process of gelation is no mystery. But the details haven’t been clear. Why is calcium alginate a gel whereas the sodium salt is soluble? And what effect does the chemistry of the encapsulated fluid have on the membrane? To answer such questions, Adrià is collaborating with biophysicist Christophe Chipot of the University of Illinois at Urbana–Champaign, US, and a team at Nankai University in Tianjin, China.

Their first foray uses molecular dynamics simulations to study the process. Since it’s not feasible either to investigate a full-sized hors d’ouevre this way or to include the chemical complexity of puréed olive, the researchers have looked at nanospheres of representative liquids such as a hydrocarbon (dodecane), a fatty acid (oleic) and their sodium and calcium salts. Alginate is a polysaccharide, a somewhat random copolymer of two sugars, and in the simulations these polymers encapsulate the core droplets in a hydrogel matrix. With calcium ions present, the alginate forms a well-defined membrane, but with sodium oleate as the core the membrane fails to cohere into a compact form.

Evidently, the calcium ions are essential. Why? The researchers find that, while both sodium and calcium ions are coordinated to electron-donating oxygen atoms in the alginate chains, the average coordination number for calcium is a little over three, while that for sodium is about two. This means that calcium ions are considerably better at cross-linking the polysaccharide chains by chelation and thereby stabilising the membrane network – a conclusion supported by thermodynamic calculations of the binding free energies.

A pure hydrocarbon core doesn’t easily grow a stable membrane either, even with calcium ions present, since it can neither sequester the ions to its surface nor benefit from direct interactions with the alginate, for example by hydrogen bonding, so as to adsorb a coating that the calcium ions can then cross-link. That’s why, if you want to make a sphericated morsel with an oily filling, the researchers say that ‘some avant-garde cuisine techniques’ are needed – as Adrià has apparently already discovered.

elBulli closed because of the massive losses it was incurring, despite typical dining costs of around €250 (£200) per head and an absurdly oversubscribed booking list. It’s not clear what will spring from it now. The elBulli Foundation announces that the restaurant will be replaced with an ‘exhibition centre’ to ‘help understand its historical and culinary evolution’, to archive the history of cooking generally and to ‘provide facilities related to the process of creativity’. It all sounds mysteriously intriguing, but I suspect most visitors will be hoping that there’s a café attached.