Standing up for chemistry

The RSC’s president, Lesley Yellowlees, sets out her ambitions for the coming years

As I start my term as president of the RSC, I’d like to share some of the issues I wish to address during my presidency. Of course, I’m interested in all things chemistry so these are by no means the extent of my goals, but they are some of the areas where I believe we need to focus our attention. 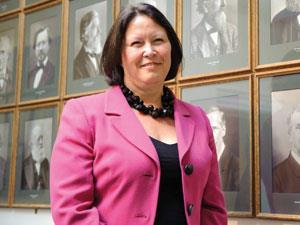 There is an appalling retention rate among women in chemistry, particularly in academia. Just over 50% of the undergraduate student population in the UK is female, but that drops to a miserly 6% at professorial level. The track record for all sciences and engineering is poor but chemistry’s decline is one of the steepest. And the same trend is seen more generally – in Scotland alone, just 27% of women STEM graduates work in the sector that they qualified in, compared to 52% of male graduates.

Personally, I have enjoyed a very rewarding and stimulating career in chemistry. I don’t have stories of hardship or being held back in my career because I was female. Indeed, on several occasions media interviews have been curtailed when I can’t produce such an anecdote. In truth, I suspect that being a woman in a male dominated environment has actually been to my advantage.

But I appreciate that others have not been so fortunate. And so, just as I have been supported throughout my career by family, friends and colleagues, it is now time for me to give back. I will be a vocal campaigner for equality and diversity in all its various forms. But perhaps more important is how we make this happen. Diversity itself is not the goal, but rather to understand the reasons why certain people or groups are under represented. By identifying barriers, we can seek to remove them; by understanding people’s choices, we can seek to inform them. What we all want, I am sure, is for our subject to exist in a fair, supportive and transparent environment that is accessible to everyone – no matter their gender, or their social, ethnic or financial background.

Enabling this diversity relies upon another of my aims: raising the profile of chemistry. Economies everywhere need a strong science base in order to recover as quickly as possible from the recent financial crisis, and at the heart of the science base is chemistry. After all, chemistry and its related industries contributed 21% to UK GDP in 2007 and supported 6 million jobs. But who knows this? My son, an economist, didn’t. My colleagues at the University of Edinburgh didn’t. A fellow traveller sharing the wait for a delayed flight didn’t. School students deciding which subjects to study and what careers to follow don’t.

So we need to blow the trumpet for chemistry, and there’s no shortage of good tunes – chemistry has been at the core of numerous discoveries that have changed our world. Among my favourites are Perkin’s synthesis of mauveine and the establishment of the dye industry (I do love wearing bright colours), the development of redox-mediated glucose sensors (I am, after all, an electrochemist) and the story of azoxystrobin – the agricultural fungicide which has increased the yields of more than 120 types of crop in over 100 countries. More recently, we’ve had the collaboration between the University of Warwick, IBM and ChemSpider to synthesise and characterise olympicene. These achievements leave me in no doubt that chemists can synthesise ideas, molecules and materials that not only benefit society but capture its imagination.

Nor am I in any doubt that we will need to: providing solutions to the societal challenges we face, such as sustainable energy and supplies of food and clean water, will demand creativity and innovation from chemists globally. And this in turn demands resources, so I will do all I can to ensure that those who hold the purse strings are informed at every opportunity how vital our sector is to the health and wellbeing of the nation, indeed the world. But financial resources are just a part of it. If chemistry is to deliver all I believe it can, then it must also have a healthy supply of young people with first rate skills in the sciences and mathematics. There is much talk at the moment about reforming school science curricula at all levels. It is imperative that this is done with full consultation of teachers, employers, professional bodies, institutions and all other stakeholders. I want to champion a curriculum of relevance, with assessments that are fair, rigorous and respected, and that will empower the population to fully engage in scientific debate.

I am delighted to be starting my term as president of the RSC – it’s a dream role – and I look forward to working with all parts of the community to promote and advance the chemical sciences. I’ve set out my stall – if you agree, please help where you can. And if you disagree, then get in touch and let’s discuss.

Lesley Yellowlees is professor of chemistry at the University of Edinburgh, UK, and president of the RSC