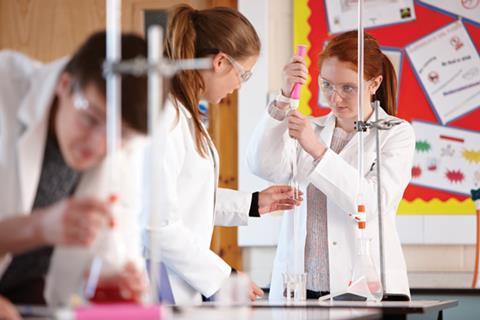 The slow drip, drip … drip of a burette is a mainstay of the school science lab, but even the most ardent chemistry enthusiast must admit that titrations are staggeringly dull. So perhaps pupils will cheer a proposal from the UK government’s Office of Qualifications and Examinations Regulation (Ofqual) to scrap assessed coursework in England’s science GCSEs.

Students currently get a quarter of their marks in science GCSEs by carrying out a handful of ‘practicals’ that are assessed by their teachers. But Ofqual has three major gripes with that system. Firstly, it argues that the assessments are prone to malpractice: pressured to produce better results, some teachers offer their students a little too much assistance, the regulator says. As evidence, it points to the suspiciously large proportion of students given full marks.

And that is the second problem. When so many students get the same mark, it becomes impossible to distinguish between them – negating one of the key aims of the assessment.

Finally, Ofqual says that teachers often train their students – over and over again – to perform a very limited number of practicals that they know will appear as assessment options. This repetitive coaching may secure high grades, but it limits the range of experimental activities that the pupils are exposed to. It must also be brain-meltingly boring for pupils and teachers alike.

Instead, says Ofqual, students’ practical experience should be tested by questions in their final written examinations. This could free teachers from the need to train their young charges for specific practical tests, affording  them time to offer a broader palette of experimental work.

The prospect of more varied practicals sounds appealing. But Ofqual’s sledgehammer solution is itself a huge, risky experiment – because the regulator has no evidence that this will be a change for the better.

Last year, Ofqual rolled out similar changes to A-level science courses, demoting assessed practicals to a separate ‘pass/fail’ certificate that does not count towards the final exam grade. The new A-level course will come into effect from September this year, despite vigorous campaigning against the idea by a wide range of scientific institutions such as the Wellcome Trust and Score, a science education partnership that includes the Royal Society of Chemistry.

It is still unclear how universities would treat the new practical certificate. Presumably they will demand a practical ‘pass’ to study that subject at degree level, but what about for unrelated degrees? And if malpractice really is widespread, surely most students will simply be awarded a ‘pass’ – which distinguishes between them even less than the current system.

There are also fears that if school managers perceive that the science practical is not crucial for university admissions, they may make funding allocation decisions accordingly – perhaps deprioritising salaries for technicians, or putting off planned upgrades to labs. There is certainly no evidence that these changes will lead to a broader diversity of experiments in the classroom.

At least A-level exam boards will send inspectors into schools to see that practicals are being carried out properly. But that has been judged to be impossible for GCSEs, simply because of the number of students involved – more than 100,000 pupils are likely to begin GCSE chemistry this year.

And it is also doubtful that pupils’ practical skills can be assessed by a written exam at GCSE. Just think how ridiculous it would be to award a music qualification without expecting a pupil to demonstrate their ability to play an instrument.

International comparisons should also give Ofqual pause for thought. According to a 2012 report commissioned by the Gatsby Charitable Foundation, teacher-assessed practicals are a key part of school science courses in China, Finland and Singapore – respectively ranked first, second and fourth in the Organisation for Economic Co-operation and Development (OECD)’s assessment of education systems worldwide (England ranks 16th). Interestingly, Singapore even assesses practicals that pupils may not have done before, to check that they have learned a broad range of skills that can be applied to new situations.

Meanwhile, the International Baccalaureate still relies on teachers assessing science practicals, as do A-levels in Wales and Northern Ireland, and the equivalent Higher qualifications in Scotland.

Few would dispute that the current system is unsatisfactory. But it is overly optimistic to believe that scrapping assessments will improve pupils’ practical abilities, or address growing concerns in universities about students who arrive without the necessary skills or confidence to tackle lab work.

If malpractice exists it should be tackled with oversight, but we must ultimately trust teachers to assess their pupils’ abilities fairly. To avoid repetitive coaching there could be greater emphasis on extended projects that require pupils to develop a range of practical skills – a move that would offer much more interest and inspiration than an endless tyranny of titrations.

Wellcome, Gatsby and the Nuffield Foundation plan to monitor how the changes to A-levels affect the teaching of practical science, and Ofqual should wait for that evidence before imposing a similar experiment on GCSE students. In the meantime, the regulator’s proposals are open for comments until 4 February. If you care about how children learn science, you should tell them what you think.