The citizen scientists searching for spores in their local forests 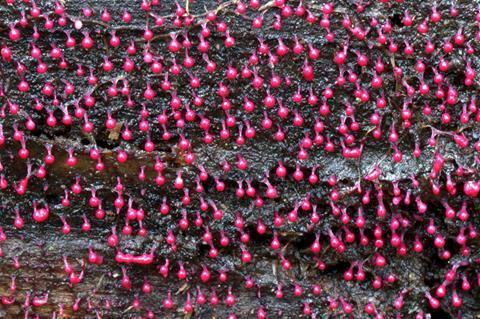 An immature patch of Physarum roseum. These spores are around 1mm tall, and might grow another 0.5mm to reach maturity

‘It was just a millimetre tall, it has like a little cage for a head and all of the spores are encapsulated in this tiny, tiny little head,’ says Teresa Van Der Heul. ‘It is deep, deep purple in colour, and it’s got a metallic sheen to it. It is the most pretty little thing and I’ve never, never seen it before.’

For 27 years, Van Der Heul has been carrying out her own citizen science project, studying tiny organisms in a small, secluded rainforest on the coast of south-east Australia.

‘I’ve had an interest in fungi since childhood,’ she explains. ‘I started off in plants where I used to collect different variants, and then I started asking questions as to why particular fungi were growing near particular plants. And I didn’t know anybody who could give me answers.’

‘These days I don’t have to buy so many books, because other people very kindly put it up on the internet,’ she laughs. ‘When I first started, there was no such thing, so I love the internet now, because I can find answers to the questions that keep piling up.’

At the start of 2020, the road to the rainforest that acts as a laboratory for Van Der Heul and her husband John was closed. Thick smoke hung in the air and bushfires raged across Australia, killing people, plants and animals on a devastating scale. A year on, the leafy laboratory is open once again for experiments and discovery.

To date, Van Der Heul has found over 500 species of fungi and 65 species of myxomycetes – more commonly known as slime moulds. ‘Considering that there’s only about a thousand [slime moulds] worldwide that have been named, that’s not bad for our tiny little 700 metre forest,’ says Van Der Heul. ‘So we were pretty stoked with that.’

The slime moulds are sometimes really tricky to spot. Often no more than a couple of millimetres high, it isn’t until you can see them up close with help from a microscope that their intricate beauty is revealed.

A self-trained expert in fungi and slime mould identification, Van Der Heul first examines the samples she finds using low magnification and a dichotomous key – a tool developed to assist with the identification of organisms – to classify the family and genus of an organism. Next, higher magnification is required to seek out characteristic decorative features in the samples – many of which have been beautifully captured by the Van Der Heuls thanks to their macro camera lens.

‘The biggest thrill of all was last year,’ she explains. I sent samples overseas to help me with the identification, and last year Dmitry [Leontyev, a collaborator from HS Skovoroda Kharkiv National Pedagogical University] in the Ukraine said, “I’m going to name this one after you.”’

The tiny slime moulds have a strong appeal for the Van Der Heuls for a number of reasons – primarily that they’re understudied.

‘They chew up a lot of bacteria and little nasties out there in the forest,’ explains Van Der Heul. ‘I have heard that … they consume bad bacteria as well, and therefore they may be of assistance ecologically. So, I’d like to know more about them. And it’s very difficult when you don’t have the education and there isn’t a lot of visually available research so that you can learn more. I just have to keep trying to find more and trying to do more research and get in touch with more people worldwide to try and find out more, so that’s what drives me.’ 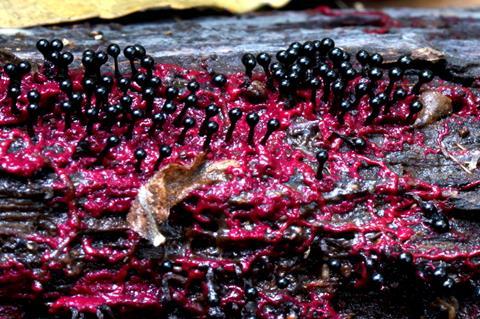 After 27 years the rainforest still holds surprises, like this mixed patch of Metatrichia floriformis (black) and Physarum roseum (pink)

Even after more than quarter of a century exploring slime moulds in their rainforest, the Van Der Hauls still face surprises from species that are familiar. A recent macro photograph captures two slime mould species, Metatrichia floriformis and Physarum roseum, growing together.

‘It was absolutely beautiful because there was all this red slime all over the log with all of these black parasols jumping up all over it,’ Van Der Heul explains. ‘It was gorgeous. It’s the first time we’ve ever seen it like that. And we’ve been looking at those things for years.’