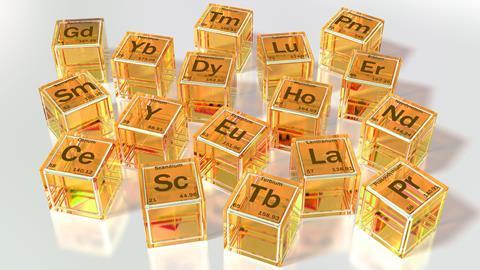 Lanthanum and actinium, or lutetium and lawrencium? Time to pick a side

Like many chemistry undergraduates of my generation, I accepted Albert Cotton and Geoffrey Wilkinson’s Advanced inorganic chemistry as gospel. So when Cotton and Wilkinson presented the periodic table with lanthanum and actinium in group 3 of the d block, underneath scandium and yttrium, then that’s how it was. Their lanthanide and actinide series – the f block – floated freely beneath, running from cerium to lutetium and from thorium to lawrencium, and slotting into the ‘short form’ table, well, somehow or another, in a manner that didn’t greatly preoccupy me.

But do a Google search for images of the periodic table and this isn’t what you’ll see. A few retain Cotton and Wilkinson’s format – such as the CRC handbook of chemistry and physics. But many leave the sixth and seventh rows of group 3 undefined, labeled only ‘La–Lu’ and ‘Ac–Lr’. Others assign those two positions instead to Lu and Lr, with La and Ac now in the f block. A few, such as the Royal Society of Chemistry’s, keep La and Ac in the group 3 column while identifying only Sc and Y as truly belonging to the group.

What to make of it all? One option is to conclude that there is no definitive periodic table. Every chemist knows the arguments about where hydrogen should sit, given that it is by no stretch of the imagination comfortable atop the alkali metals. But that debate is mild compared with the fury that has been incited in arguments over group 3.1–4 Should we agree to disagree?

This doesn’t seem terribly satisfactory. The periodic table is widely considered chemistry’s prize exhibit: the most elegant condensation of all chemical lore, its ‘beautiful idea’ fit to stand alongside natural selection, the DNA double helix and the Dirac equation. How embarrassing, then, to admit that it doesn’t actually have a definitive shape at all.

Besides, the table is said to be dictated by physics. It’s not some arbitrary or empirical concoction: it has a structure defined and explained by the quantum theory of the atom, which governs the electronic configurations of elements. Out of that fundamental theory emerges not only Wolfgang Pauli’s Aufbau principle for the filling of electron orbitals but also the so-called Madelung rule for determining the ordering of the periodicity. This stipulates that the ordering of orbital filling follows the sequence of increasing quantum numbers n+l, where n is the shell number and l the orbital angular momentum: l=0,1,2,3… corresponds to the s, p, d, f orbitals and so on. For elements with equal n+l, that with the lowest n comes first.

This rule works wonderfully most of the time, but there are exceptions: for example, the pause in filling of the d orbitals while the outermost s orbitals are filled for chromium and molybdenum. It’s easy enough to rationalise those anomalies, but for the f block things get trickier. Take thorium. Its electronic structure beyond the radon closed-shell core is 6d27s2: it has no 5f electrons at all in its ground state! What is it doing in the f block? But it would be absurd to put it anywhere else – it’s easily accepted there as an anomaly.

A similar inconsistency clouds the question of which pair of elements claims the places in group 3, for none of the element candidates (La, Ac, Lu or Lr) has partially filled f orbitals either. Lanthanum and Ac have configurations [Xe]5d16s2 and [Rn]6d17s2 – and so, with their partially filled d shells, might lay claim to be d block elements. But wait: Lu also has that claim, with configuration [Xe]4f145d16s2! What of Lr? It seems to be different again; relativistic calculations have suggested that its outermost electron goes not into a 6d orbital but into 7p, and recent experiments on this very short-lived element seem to confirm this, indicating that it has a surprisingly low first ionisation potential.5 Doesn’t that weaken its claim to be a d block element?

Some think so. Others say that Lr might instead be regarded as simply another anomaly: a d block element with no outer d electrons. That might seem like special pleading, but not necessarily. Consider what the alternative of putting Lr and Ac in the d block entails: either the f block has to be placed before the d block (which disrupts the steady progression of atomic number, and so seems indefensible), or the f block must be interposed between group 3 and the rest of the d block, which seems awkward at best. What’s more, this arrangement would then disrupt vertical trends in several chemical properties, such as atomic radius and melting point.1 Besides, Lu has physical and mechanical properties resembling those of transition metals6 – although whether it is chemically more akin than La to Sc and Y is less clear.7

A task group,8 of which I have been asked to be a member, now aims to solve the problem. We hope to make a recommendation to the International Union for Pure and Applied Chemistry (Iupac) after consultation and discussion, for which comments and suggestions are most welcome.

Editor: If you have any views on what belongs in group 3, get in touch at chemistryworld@rsc.org – we’ll pass them on.