The rise and fall of leaded petrol 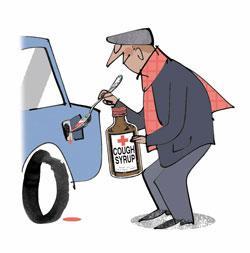 The motor car revolutionised the 20th century. Every turn of its internal combustion engine compresses a mixture of air with hydrocarbon fuel droplets and vapour, and then fires it with an electric spark. The more the engine compresses the mixture before igniting it, the better. But high compression can ignite the gas before the spark - the engine ’knocks’. So from about 1916, Thomas Midgley - then at the American Dayton Engineering Laboratories - set out to inhibit knocking by putting additives in the fuel. A chemist might assume that the fuel gas pre-ignites because compression makes it hot, so would try to raise its ignition-temperature. But Midgley was an engineer, not a chemist. He had noticed that additives put into the fuel (such as dyes) affected its knocking qualities. He started a vastly ambitious chemical programme, going through almost the whole periodic table. He looked at each element in turn for some volatile compound he could put into motor fuel as an anti-knock additive.

His idea seems to have been that burning broke up any substance into atoms, and you wanted to get the right atoms into the fuel. Again, this makes little chemical sense. While fire is indeed a gas-phase free-radical molecule-breaking reaction, I doubt that it liberates atoms.

In the end Midgley found an excellent volatile anti-knock additive: tetraethyllead. Annoyingly, lead alkyls in engine fuel burn to lead oxide, a solid which soon jams the engine. So he came up with another additive: ethylene dibromide. This converted the released lead to its bromide, which in the hot engine was effectively volatile.

Midgley’s fuel chemistry was developed from about 1920 to 1970. But the writing was already on the wall. As cars became ever more popular, the exhaust they poured out was seen as wasteful, dangerous to breathe, and not at all ’green’. Not only did a car emit lead, with its associated problems of pollution and neurotoxicity; it also emmitted carbon monoxide and unburned petrol.

One ingenious filter which reduced the output of lead from an engine was a coil of wire coated with alumina, but it never got anywhere. A rival filter, the catalytic converter, acted as an engine ’afterburner’, burning up carbon monoxide and unburned fuel. It contained platinum and soon became standard on all cars. But the catalytic converter was deactivated by lead. Even as bromide, the metal degraded the platinum catalyst.

In retrospect, I am amazed at how intensely the fuel companies fought for lead anti-knock additives. However, as soon as the government reduced the tax on lead-free petrol, those same companies rapidly came up with lead-free fuel. They switched to using oxygenates, such as methyl tert-butyl ether, which also inhibit knocking. To be as effective as lead alkyl, you had to put more oxygenate in the fuel; but it gave a cleaner exhaust and did not upset the new catalytic converters.

The chemical industry, which made fuel additives, felt the shock keenly. The catalytic converter contains platinum, so companies in the precious-metal business did well. Companies which could make oxygenates did well, too. So did car-scrappers; even a dirty catalytic unit retained its platinum and its value. However, companies which electrolysed salt into sodium and chlorine felt the pinch. Chlorine has many uses; but almost the only use for sodium was in making the sodium-lead alloy that got turned into lead alkyls. There is still no good use for bulk sodium.