When the magazine New Scientist was started in 1958, each reviewer also got a little brown sample of 'silly putty' 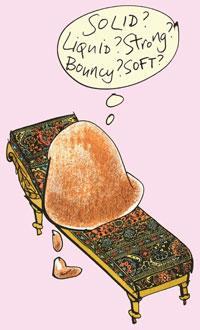 When the magazine New Scientist   was started in 1958, each reviewer also got a little brown sample of ’silly putty’. As a form of ’chemical advertising’, silly putty was wonderfully effective. It is neither a true solid nor a true liquid. You can mould it in your hand like putty; but if you drop it, it bounces. On a short time-scale it behaves like a rubber, but on a longer time-scale it flows like a liquid. The stuff is a complex mixture of ingredients, but the crucial component is polydimethylsiloxane. I still have some of that brown putty, now half a century old.

Silly putty was invented in 1943 by James Wright, a worker for General Electric, who mixed silicone oil with boric acid as part of US research into making synthetic rubber. It proved industrially useless, but with a slightly modified recipe, became the popular toy we all know and love. Just this April Fool’s Day I was given a few grams of a green Chinese version. Yet my original silly putty seems a more convincing half-way house between liquid and solid. If you press it with a finger, it retains your fingerprint, but loses it over the next hour or so. Even the feeble surface tension of the putty overcomes the imposed detail, and it flows smooth. By contrast, my Chinese silly putty retains a fingerprint indefinitely.

Is silly putty a liquid or a solid, then? For us chemists, the difference matters. Indeed, chemistry depends on it. A traditional chemical reaction is set up by dissolving each reagent in a liquid solvent, and mixing the solutions. The reagent molecules can then get at each other. Ideally, the product of that reaction is a solid. It precipitates out of the liquid; it can be filtered away with filter paper, washed and dried. So a halfway material like silly putty intrigues and bothers us.

Silly putty reminds us that the difference between a liquid and a solid is merely one of time. Given enough time, all solids flow - which is why the Earth is round. (Conversely, liquids behave solidly on a very short time-scale - as you can demonstrate by skipping a flat stone off calm water).

As chemists in the laboratory, we don’t often appreciate the structural changes that can be wrought slowly over time. Like industrialists, we try to do things quickly. By contrast, natural processes often take place very slowly. Marble, a stone renowned in statuary and architecture, may be calcium carbonate but we cannot make it. In the laboratory we make calcium carbonate and calcium phosphate quickly as weak fine powders; life somehow makes that carbonate tough enough for shells. Bone, a form of calcium phosphate so strong that it forms the animal skeleton, is again beyond us.

Of course, slowness is not the only trick up nature’s sleeve - biochemistry and geochemistry have many other clever subtleties. But maybe the slow processes of life, whose structures grow at constant temperature over months or years, encourage a different sort of chemistry to the rapid reactions we try to set up in the laboratory? Zero-gravity chemistry, with no convection but everything happening gradually by diffusion, gives very strange structures. A dilatant solvent like silly putty might create processes even stranger. Take your time, silly putty says - so why not try dead-slow chemistry with silly putty as a solvent?