The magic of microwaves

Do the devices just heat cups of tea or is there more to their use in chemistry? 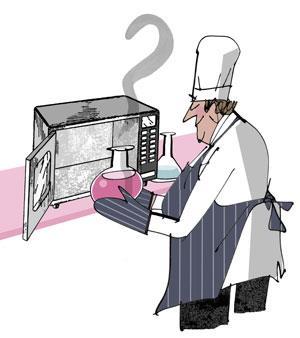 A war often does wonders for technical development. The second world war was no  exception. Among the many inventions it hastened or brought to maturity was the microwave oven, which was developed from radar sources. Many companies developed the klystron and the magnetron as powerful sources of microwaves for radar. After the war, the American company Raytheon wondered what to do with the radar emitters it had developed. It invented the microwave oven.

One employee left rather than help to produce a magical device, but the microwave oven took off and became a crucial item in many kitchens. It is indeed a splendid way of heating food – or more exactly wet food. Those many watts of microwave power are absorbed almost entirely by the water in the food. Indeed, a microwave oven is a powerful way of reheating a beverage. You should not even pour the stuff into a saucepan – just put your tepid tea in the microwave oven.

I have played around with this water-heating effect in chemistry. In a microwave oven, water gets hot very fast, while vegetable oil (for example) does not. I suspect that molecules like those in free water, which can rotate at microwave-frequency, can absorb the energy of the radiation. Those which cannot, stay cool.

For example, I have failed to dehydrate crystals such as borax hydrate and sodium carbonate hydrate in a microwave oven. Presumably the water molecules held in a crystal lattice cannot rotate fast enough. But a microwave oven can get a lot of water out of silica-gel drying agent, so maybe some of the absorbed water molecules can spin. With self-indicator silica gel you can even turn the bigger chunks from pink to blue. But sadly, you still need old-fashioned heat to make the gel really dry.

Could the microwave oven make a bigger impact on chemistry? It has already had an effect on elemental analysis, at least for several types of sample.  Such samples are traditionally subjected to a prior ‘wet ashing’, usually involving some brutal acidic mixture like nitric plus hydrochloric acids. A microwave oven speeds things up, and lets the analysis be done in a sealed vessel. Simply as a new source of heat, microwaves can often supplant the traditional flame-heated glass or the electric heater. An industrial example is the bulk pasteurisation of milk. A microwave source of heat can warm the milk smoothly without transferring heat from a hot solid; this greatly simplifies the process.

But the possible chemical effects of microwaves continue to nag at me. In principle, a microwave source could selectively heat molecules that rotate at a specific frequency.  Tuned to spin the right ones, microwaves should encourage specific chemical reactions.

Sadly, the theory of the process is still very vague.   Frequency is one bugbear: I have only encountered one microwave oven which gives its working frequency, yet a useful chemical recipe might need to define that frequency exactly. Temperature is another: how do you measure the temperature of a sample inside an oven? You cannot put a metal inside, so you cannot use the conventional mercury thermometer. Chemical microwave enthusiasts have used fibre-optic temperature sensors, and have even sought to distinguish thermal effects from molecular ones.

My own feeling is that something non-thermal and chemically useful could go on in a microwave-heated reaction. However, nobody has yet pinned down what it is.