The woman whose books made science popular

Mrs B has a reluctant pupil. ‘To confess the truth,’ says Caroline, a sparky and sometimes rather cheeky teenager, ‘I am not disposed to form a very favourable idea of chemistry, nor do I expect to derive much entertainment from it.’ To Caroline, chemistry amounts to ‘the mixing up of a few insignificant drugs’. 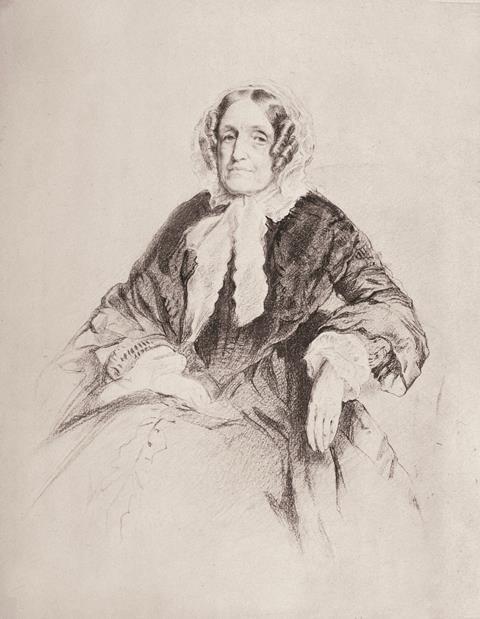 Mrs B soon sets her straight. Even at the start of the 19th century, when this conversation was published, a ‘chemist’ signified to many people what it still does today, at least in the UK: someone who dispenses drugs, or as Mrs B puts it, ‘the apothecary’s shop’. But Mrs B tells her student that ‘the most wonderful and the most interesting phenomena of nature are almost all of them produced by chemical powers’.

This panegyric to chemistry, which appears in Jane Marcet’s Conversations in chemistry (1806), has a similar tone to that of professor Waldman in Mary Shelley’s Frankenstein (celebrating the bicentenary of its publication this year). It’s no coincidence, for both were inspired by the work and words of Humphry Davy, on whom Shelley explicitly based Waldman, the lecturer who instructs the young Victor Frankenstein. Marcet saw Davy give his charismatic and spectacular lectures at the Royal Institution (RI) in London, and it’s possible that Shelley did too: Frank James, the RI’s resident historian, says there are records of a young girl around Shelley’s age at the time attending a talk by Davy. I fondly imagine Marcet seeing her there and deciding to base Caroline (or perhaps Emily, the more studious of Mrs B’s two pupils) on her, although it’s not clear the precise timings will bear the strain.

When I wrote my first popular science book (it wasn’t that popular), on chemistry, I was blithely ignorant of the debt I owed to Conversations in chemistry, which is arguably the first popular science book of any sort. It was aimed at young readers, particularly girls – at a time, of course, when science was generally deemed to be solely a man’s profession. Mrs B can’t offer Caroline and Emily any assurance that they can expect to become chemists. But when she explains that the study of chemistry ‘will enlarge the sphere of [a girl’s] ideas, and render the contemplation of nature a source of delightful instruction’, she is challenging the prejudice of her age: women can have ideas and take pleasure in learning, rather than just cultivating themselves for marriage-worthy drawing-room conversation.

Marcet was a remarkable person. Lacking any formal training in science, she was motivated by Davy’s lectures to investigate chemistry with the help of her husband Alexander, a Swiss-born physician who knew Davy personally. She was encouraged to write up what she learnt and her book became a bestseller, going through 16 editions by 1853. Marcet went on to write more than 30 other educational books over five decades, on subjects ranging from physics to grammar to political economy.

Conversations in Chemistry was unlike the dry textbooks of the time. The exchanges between Mrs B and her students are lively with wit, while full of accurate and up-to-the-minute information. Marcet explains Lavoisier’s oxygen theory – even though it wasn’t yet universally accepted by scientists – as well as the prevailing theory of affinities that was thought to account for chemical combination. The first edition predated the publication of John Dalton’s New system of chemical philosophy (1808), and Davy’s initial skepticism about Dalton’s atomism probably warned Marcet off it anyway – but when Davy was converted, later editions of Conversations mentioned atoms.

It’s prescient, too. When Mrs B tells Caroline that her diamond ring is made of carbon, the bright girl immediately asks: ‘Why should they not be manufactured, or imitated by some chemical process, which would render them much cheaper and more plentiful?’ Why indeed. That quest preoccupied several chemists later in the century, including Nobel laureate Henri Moissan, until finally synthetic diamond was produced first by high pressure and temperature and then, in chemical vapour deposition, by chemistry alone. Mrs B thinks it would be a vain quest, but even in saying as much she will sound astute to many a rueful chemist today: ‘It is sometimes as much beyond our power to obtain a simple body in a state of perfect purity, as it is to imitate a complicated combination.’

Even more resonant is Caroline’s response to Mrs B’s explanation of the difficulties of imitating nature with chemistry. ‘I did not imagine that the principle of life could be imitated by the aid of chemistry; but it did not appear to me ridiculous to suppose that chemists might attain a perfect imitation of inanimate nature.’ Could Shelley have read Marcet’s book? I know of no evidence, though it wouldn’t be surprising.

Someone who certainly did read the book was Michael Faraday, who came across it when it was sent to the bookbinders at which he was apprenticed. It inspired him to study chemistry in his spare time, and when the chance came in 1812 for him to go to some lectures by Davy at the RI, he seized it. The rest is history – and Faraday, whose legacy of educating young people in science continues today. Never forgot the debt.