As far as ‘worst days of my PhD’ goes, this is easily in my top ten. Our group was quenching its sodium solvent stills – purification systems containing a reactive metal to mop up residual water. These require an annual quench and de-gunking. It’s not a trivial operation. Most of us will have seen the demonstration of sodium placed into water, fizzing and sparking aggressively behind a thick safety shield; this was the same thing only on an industrial scale. The risk of a sodium fire was real. 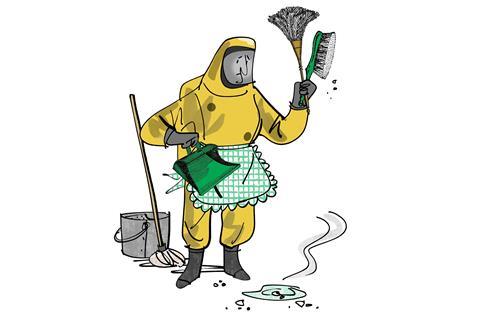 As lab safety manager, minimising fizzes and sparks was my duty. I watched my labmates diligently, stepping in if they rushed, nudging them about full PPE, discreetly moving fire extinguishers a little closer to the bench. We had good standard operating procedures (SOPs) written, and most of the group were seasoned quenchers. Things seemed to be going well.

The day became more intense when our dioxane still exploded with a deep boom. Fortunately, it was nested in a thick ice bucket behind a closed fumehood sash, so only a few shards of glass and liquid escaped – but had someone been quenching it at the time, it would have been a nasty accident. I’m ashamed to admit that I’d been so preoccupied by the risk of sodium fires, it hadn’t crossed my mind to worry about random explosions. Solvents like dioxane can form explosive peroxides if left standing for a long time, and I couldn’t remember that still ever being used. Agitation of the solution had set off the delayed bang.

At this point my stress levels were testing the pressure of my artery walls. I really wanted to leave and hope this wet mess magically tidied itself up overnight but, as the designated responsible adult, I instead contacted Health & Safety to report the near miss. I knew this would be an epic undertaking. It turned out its officers were already on campus, removing black mould from the psychology department. It didn’t take long before they were on scene: a message with the subject line ‘Explosion in lab’ gets a very quick response time.

Here the day became a lot more interesting. Upon request, I hunted down the chemical hazard form for dioxane, some of which had spilled out and needed cleaning up. As an organic chemist, I would have spent five seconds scanning the form to conclude I should wear my usual PPE and not drink it (dioxane doesn’t taste that good anyway). Unfortunately, the members of a Health & Safety team aren’t necessarily holders of a science degree, and we don’t always speak the same language. The Health & Safety officers froze at the word ‘carcinogen’.

If you really read these chemical hazard forms and take everything literally, organic chemists live life on the edge, surrounded by a world filled with bottled danger. Health & Safety weren’t such reckless fools. We watched as the attending team geared up to clean the dioxane splashes. They wore hazmats, face masks, thick rubber boots and boot protectors. They donned five gloves per hand (I counted) and began an hour-long disinfection of the lab. I thought about offering to slip on my nitrile gloves and wipe down the affected areas with a paper towel, but knew they’d disapprove of such suicidal recklessness. My labmates wondered if we should give up organic chemistry and take up bear wrestling – perhaps it was the safer lifestyle choice.

Health & Safety sought security in one thing: paperwork. It didn’t really matter what we did in lab, as long as we had an official-looking SOP that mirrored our activities and could be waved about in an emergency. The paperwork had to be clinically precise in a way that organic chemistry rarely is. Our spill was a mixture of dioxane, melted ice, alcohols from the quench and several sodium ions – the kind of solution chemists would classify as ‘y’know, a small amount of everything’. That wasn’t good enough: everything had to be broken down accurately into percentages before they’d accept the waste containers. The mental strain of this calculus was profound. Eventually the Health & Safety team reversed their dance of the five gloves, leaving with their piles of paperwork and a satisfaction that nobody was going to get cancer. Back to the mould in psychology.

It was a stressful day, but a reminder that a certain amount of bilingualism is required to survive as a scientist. The Health & Safety team may have looked at the world through different goggles than the chemists, but they just wanted us to be safe. Of course, we wanted the same thing. And there was still the sodium quench to finish…