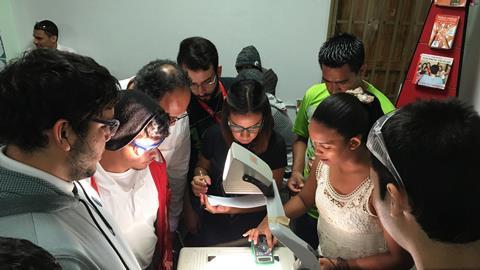 The Solar Army marches on

As teams of climate scientists send out mayday calls to the governments of the world, groups of young chemists are getting into formation.

The ‘Solar Army’ is a team of school students and researchers exploring ways to generate cleaner sources of energy from sunlight and water. First assembled in 2009 by Harry Gray from the California Institute of Technology, the Solar Army started as the outreach branch of the Center for Innovation in Solar Fuels. School children were invited to take part in scientific research exploring solar energy and new ways to create clean fuels.

Jorge Colón from the University of Puerto Rico has been instrumental in building the Solar Army’s ‘Caribbean brigade’. ‘In 2011, I heard Harry talk about the Solar Army at a meeting of the American Association for the Advancement of Science and soon after, I sent him an email saying how happy I was to see his talk. He wrote straight back and asked me to head up a new division in the Caribbean, so I did.’

For students in Puerto Rico, the first taste of the programme is a workshop involving blackberries, called Juice for Juice. They extract anthocyanins from the fruits, which can be used as cheap alternatives to the dyes normally used in dye-sensitised solar cells (DSSCs).

These cells mimic the way that plants use chlorophyll to convert sunlight into the energy through photosynthesis. Instead of chlorophyll, DSSCs contain an alternate light absorbing dye and a metal oxide that can carry electrical charge.

‘From the blackberry juice, they get “juice” because they get electricity.’ explains Colòn. ‘Each team constructs dye-sensitised solar cells and we test each of them in kind of a competition to see which is best based on measurements of voltage, current and power generated.’

Since 2011, Colòn’s team has delivered ‘dozens and dozens’ of the workshops to over 5000 students. Juice for Juice has also proven to be a stepping stone for further engagement.

‘Some students get really enthusiastic after the first workshop and choose to participate in a science fair and try to make better dye-sensitised solar cells.’ says Colón. ‘For example, some students have worked with tropical fruits from Puerto Rico to see whether these juices contain molecules with useful properties for capturing the energy of the sun.’

Colòn and his research lab have invited enthusiastic students to their laboratory to do experiments and measurements. ‘Several students have been very successful and won competitions in their schools or even reached regional and national competitions,’ he adds.

Clean fuel in the classroom

Another extracurricular research project available to students invites them to screen mixed metal oxides as catalysts for water electrolysis. Students use kits developed by Caltech to perform combinatorial chemistry experiments with different metal salts. ‘We explain to the students that mixtures of metal oxides perform better as catalysts than those made from just one metal oxide and that with all of the metals on the periodic table there are lots of combinations and millions of possibilities,’ says Colòn.

For Colòn, this aspect of the outreach is particularly rewarding. ‘This is actual real research that they’re doing and they’re learning about how to do research; how different parameters can be changed and how that changes our results.’

Renewable energy research is of particular importance to Puerto Rico. ‘We are aware of the threat that we have in terms of the climate crisis but also that we are still putting resources into national gas. If we spend too much on infrastructure relating to natural gas then we won’t be able to finance the transition towards the infrastructure needed for renewable energy.’ But Colòn sees how motivated the younger generation are in terms of making this transition and he routinely recruits new volunteers to the Solar Army whenever he talks to student groups.

Colòn’s involvement in the Solar Army also influenced some of his own choices about energy at home. ‘In 2014, I put 15 solar panels in my home, but when Hurricane Maria struck in 2017, I didn’t have back up. I spent four months without electricity in my home but now I’ve installed batteries. I tell the students about my experience when I’m getting them involved in outreach.’

Colòn’s next plans are to expand the Solar Army to other countries in the Caribbean so that even more students can be impacted by the project. ‘I’ve been really involved in the Science for Haiti project that started straight after the earthquake in 2010. So, I have this goal, of one day going to Haiti to give these workshops on solar energy and the related issues. There’s also been interest in the Dominican Republic so now I want to find funding to expand our operations to reach these countries.’