2B or not 2B? Pondering the chemistry of the humble pencil 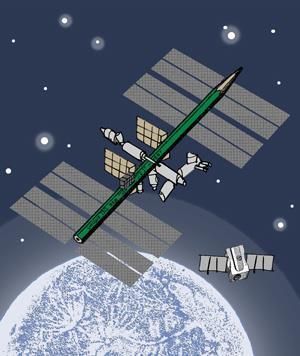 Did you hear the one about Nasa spending years of work and millions of dollars perfecting those space pens, while the thrifty and wily old Soviets just used pencils? It’s a great story but sadly no more than that. It was a privately owned company that perfected the zero-G pens, not Nasa, while both runners in the space race found pencils unsuitable. They break too easily, and having bits of sharpened wood and graphite floating around in low gravity isn’t very safe.

But if being used in space was a giant leap too far, the humble pencil still has a lot going for it. I recently returned to using one for a reasonably long piece of writing. After so long relying on electrons and photons to display my words, with the occasional laser-guided spot of ink, it felt almost thrillingly physical: the gentle scratching across the paper, and the grey trail of carbon atoms left behind, perceptibly changing the shape of the pencil’s nib.

It felt as though the words were flowing from my brain cells onto the paper with only my hand in between. Somehow writing with a ballpoint pen just isn’t the same. A fountain pen, however – which I regularly use at home – is pretty close: you can see the nib gently flexing apart and leaving behind the ink, quickly losing its white shine as it spreads among the fibres of the paper.

The writing a pencil leaves behind also has its own interesting chemistry. Graphite is so commonplace, cheap and in some ways unappealing (greasy, sooty) that it’s scarcely believable it can be related to the superlatively hard – and superlatively expensive – diamond. How can a different arrangement of the same atoms make such a difference?

I well remember an experiment I did in physics A-level at school. Using a simple pencil, we coloured in a 5cm × 5mm area on a piece of paper as thickly as we could. As graphite of course conducts electricity, it was simple to use a multimeter to measure the resistance of the ‘circuit’. Knowing the length and width (one dimension of the cross-sectional area) it was a simple calculation to measure the thickness of the pencil mark.

Repeating the experiment in the office, we got a thickness between 4–80nm, depending on the value used for carbon’s resitivity. Working on roughly 1–2Å (1–2 × 10–10 m) per atom, that’s anywhere between 20 and 400 atoms thick. Surely some of this carbon must be in the form of few or single layers of graphene. It’s perhaps humbling to think that, for hundreds of years, people have been doodling little circuits of the 21st century wonder material without realising.

Although we call the graphite in pencils ‘lead’, the heavy metal itself has not been used in pencils, or at least not since antiquity, contrary to common belief. The confusion arose when large-scale graphite deposits were discovered and people believed it was lead or lead ore. The only large deposit of pure graphite is to be found in Cumbria in England, where there is now a pencil museum. The material, also used to line cannonball moulds, was unavailable in France during the Napoleonic wars. As usual, this necessity proved the mother of invention and Nicolas-Jacques Conté discovered how to process powdered graphite and clay into pencils of different hardnesses by varying the starting quantities. The method is still used today to produce the implements everyone around the world learns to write with.