What do you fear most in the lab? Although I have lit more hydrogen balloons, white phosphorus and magnesium/perchlorate fuses than most, just the idea of a fire in a lab fills me with limbic dread. But fires have been a grim reality for chemists since the subject was born. Much of synthesis is done in liquid fuel, often at the boiling temperature. To compound it, our solvents need to be anhydrous. Traditionally this meant a row of solvent stills which in the ‘good old days’ sat in a row on a spare bench: two litres of solvent, alkali metal or metal hydride, all topped off by a water condenser. What, in that hackneyed phrase, could possibly go wrong?

But the stills were only the beginning. The sodium press in the corner of the lab was used to extrude a few meters of slender metal thread into the Winchesters stored in cupboards under the bench. And then there was disposal of old still-pots, gently feeding alcohol, hour by hour, into a brown glop spiced with silvery nuggets of eruptive metal… it still gives me the shivers.

That we no longer have this to worry about can be traced to an industrial research lab in the US. In the 1980s a new class of polymerisation catalysts emerged based on a metallocene framework. These constrained-geometry ‘living’ catalysts were not just highly active, but they also gave narrow molecular weight distributions that gave them more tunable properties. At Dow Chemical’s central research station in Midland, Michigan, the chemist James Stevens set up a team of scientists to investigate them further. Among these was Francis ‘Frank’ Timmers, who’d spent five years as an academic at a small college in his home state of Wisconsin. Unlike the rest of Dow’s huge polymer production, the systems that Stevens and his team developed operated in hydrocarbon solutions rather than with gases or slurries. The extreme Lewis acidity of the hundreds of catalyst candidates that they prepared and screened required meticulous attention to moisture. There was therefore a set of stills in the lab whose presence made the group quite nervous.

It occurred to Timmers and his colleague Rob Rosen that solvents were never dried by distillation on a production scale, but with drying agents like alumina or molecular sieves. They therefore set up the equivalent of a chromatography column packed with alumina in their glove box, poured commercial grade solvent through it, and tested their catalysts. Sure enough, the solvent was as dry as a bone.

Timmers and Rosen, who liked nothing more than to tinker with Swage connections and valves, decided to scale things up. Money was not a problem. They filled cylindrical steel towers with beads of alumina (held in place with glass wool), and used towers of the copper-based Q5 catalyst to remove oxygen. Meanwhile they ran riot through the SwageLok catalogue, adding bespoke parts made in the Midland technical workshops, so that the solvents could be handled entirely under inert gas. Then they hooked up some of Aldrich’s dark blue canisters of dry solvent, pressurised with nitrogen. The solvent that came out was of the first quality and the team breathed a sigh of relief as the old stills were dismantled forever. 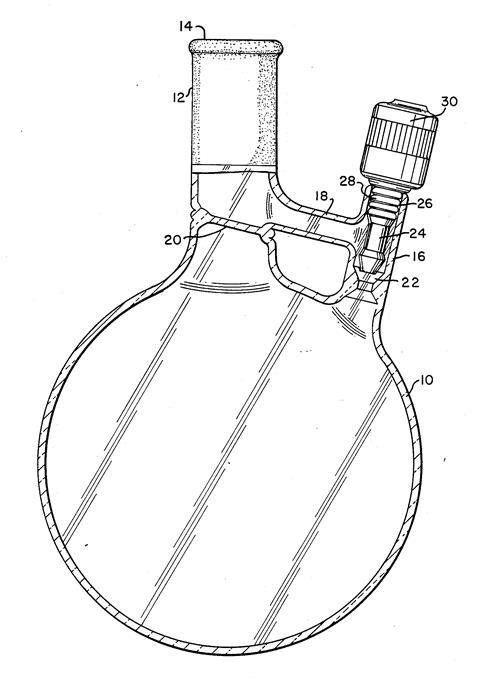 Around 1995, Bob Grubbs, one of the leading experts in catalysis in the US who was based at the California Institute of Technology (Caltech), came to the Midland site to give a talk and meet Stevens’ team. When Grubbs heard of the system it was the answer to his prayers. For years he had phoned home to make sure his kids were safe and phoned the lab to make sure his students were safe. Returning to Caltech, he asked Mike Giardello in his group to build a similar rig and test it. To make it entirely compatible with their old solvent stills they added a standard B24 cone. Students drew solvent out of the system using a Straus flask, a collection and storage flask equipped with a Teflon stopcock that had been devised by Daniel Straus, a former student of Grubbs’.1 Straus would later supplement the meagre start up fund he got as a junior academic by assigning the drawings for the flask to Kontes Glass, who paid him royalties.

The article that described this new system caused a real stir.2 Although some doubted that a material as dull as alumina could do the job of the more exciting alkali metals, a series of huge, well-publicised laboratory fires – of a scale that someone using a risk assessment matrix would call catastrophic – led to rapid adoption. And a number of studies using Karl Fischer titration confirmed the dryness of the solvent. Because the cost deterred some from adopting the system, Bob Bergman and PJ Alaimo at Berkeley simplified things and stripped out the deoxygenation column, arguing that one only needed to sparge the solvent with inert gas to displace oxygen.

Neither Dow nor Caltech made a dime from the idea. Several firms now sell them commercially. What is known affectionately in our department as ‘The ASS’ has saved us more damage, injuries and time than almost any innovation in our labs, to which one can add huge savings in electricity and water. As Bob Grubbs pointed out to me, it’s one of those rare cases where the safer method is actually more convenient than what it replaced.

I am hugely grateful to Rob Rosen and Bob Grubbs for their reminiscences. Bill Evans, Bob Bergman and PJ Alaimo all shared their thoughts with me.