I recently had a drink with a film-maker who wanted my thoughts on what innovative, cutting-edge chemistry might be good to use in a film. I suggested a host of ideas, but with each suggestion, she grew more sceptical – she felt magnetic materials must be physics, single molecule detection sounded like forensics, nanostructured materials seemed like materials science, and the origin of life, well ‘isn’t that biology?’. Eventually, she asked me where all the chemistry had gone; it all sounded like something else. Her response echoes the regular complaints heard whenever the Nobel prize in chemistry is awarded for something that ‘isn’t really chemistry’, such as the structure of the ribosome, bioluminescence or eukaryotic transcription. 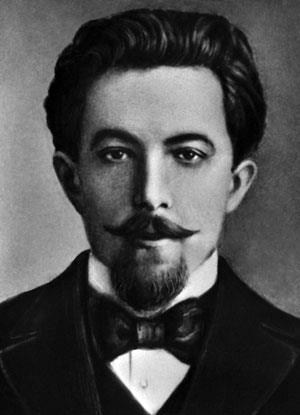 Yet the complainers are completely missing the point. Chemistry is not dissipating; quite the opposite – it’s invading. In the life sciences especially, it has come to underpin everything from physiology to imaging to genetics. And, for me, that all began with the work of an obscure botanist trying to understand photosynthesis.

Mikhail Tsvett was born in Asti in Italy. His father was a Russian civil servant and his mother was of Piedmontese descent. She died while he was young and his father moved to Lausanne in Switzerland where he grew up on the banks of Lake Geneva, speaking French. His father, however, insisted he learn Russian as a teenager. He studied botany at the University of Geneva and graduated with a doctorate on plant anatomy in which he proposed that chlorophyll was associated with proteins.

When his father was given a job in St Petersburg in 1896, Tsvett moved with him. Unfortunately, securing a Russian academic appointment required Russian academic credentials so he studied for a Master’s degree at the University of Kazan, 700km east of Moscow, focusing on photosynthesis.

He repeated the experiments of George Stokes and Henry Clifton Sorby, who had separated several components of plant extracts by partitioning the compounds between different solvents. Tsvett began stirring hexane extracts of leaves with finely ground calcium carbonate in the hopes of neutralising the acid components that would otherwise degrade his pigments. He found that everything stuck to the carbonate, apart from the carotene. But by adding progressively more ethanol to the carbonate he could controllably separate off the other components – the green pigments he called chlorophyllins (which fluoresced) and the yellow ones, xanthophylls (which did not). He went on to isolate fucoxanthins from seaweed and an additional chlorophyll we now know as chlorophyll c.

It is not clear how he turned to the idea of using a column, and whether he was aware of Friedlieb Runge’s capillary experiments or of their development by Christian Schönbein and others. But in 1906 Tsvett published his most important paper: describing his separation method that now involved pouring the extract onto the top of a column of dry calcium carbonate and then washing the components out by running solvent down the column. What he saw was remarkable: ‘The pigments arrange themselves as a series of coloured zones … in which the more strongly adsorbed materials displace the more weakly held ones further down the column … I call this a chromatogram.’ Already keenly aware of his method’s generality, he added: ‘Needless to say the described adsorption phenomena are suited not only to the chlorophyll pigments.’ In a later paper, published from Warsaw where he got an academic position, he would go on to describe the characteristics of an ideal absorbent, having tried dozens of different materials. He also announced that there were two different chlorophylls (a and b), and four xanthophylls.

His work was attacked by other experts in the field, particularly the cantankerous Polish chemist Leon Marchlewski who not only thought he was wrong, but considered the very basis of his method to be unsound, and his results artefacts. But Tsvett stood his ground and continued his work, carefully untangling the relationship between the derivatives of chlorophyll. In parallel, the German chemist Richard Wilstätter conducted painstaking ‘classical experiments’ on chlorophylls using huge quantities of extract, dismissive of Tsvett’s results. Tsvett soon picked enough holes in the German’s work, using chromatography, to force him eventually to concede that Tsvett’s results were correct. Yet in spite of these triumphs no one took up Tsvett’s method until the 1930s, long after his death.

Tsvett would have described himself as a botanist, yet for much of his short career he was engaged in what was indisputably a chemical quest. And in this respect he had ideas far ahead of their time: ‘It is often forgotten … that living tissues are not simple chemical mixtures of compounds in chemical equilibrium, but organised structures [in which] the most varied reactive bodies stand next to each other.’

Chromatography opened up all kinds of mixtures to rigorous investigation, but it also represents the moment when chemistry began to provide serious tools for other disciplines. Today, all of the biological sciences (think of all the new ‘-omics’) and an enormous part of the quality control and forensics industries are based not just on chemistry, but on a kaleidoscope of chromatographies. If chemistry is dead, then long live chemistry.