Measuring viscosity is a sticky subject

Most of us think we have an intuitive feel for viscosity – liquid nitrogen is runny; honey is not. But if you are asked to define it and explain its origin, things quickly get sticky. It’s one of the strangest and most fundamental properties for life on Earth, yet few of us really think about it. As the physicist Edward Purcell pointed out in his seminar Life at low Reynolds number, viscosity is strongly scale-dependent. A human can swim in water by pushing against it, but microorganisms, trapped in a world where the forces they can generate are far exceeded by those of the water around them, require a totally different strategy. And by measuring viscosity we can get myriad insights into molecular structure too. For Leo Ubbeholde, viscosity was a lifelong fascination. 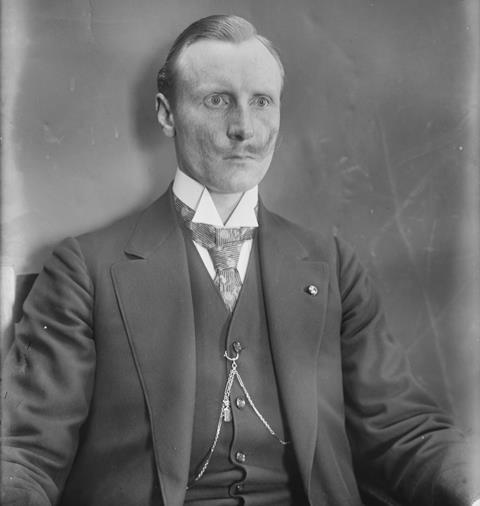 Source: Image courtesy of the US Library of Congress

Ubbelohde’s parents were involved in the peat business in and around Hanover, Germany. When their firm went bankrupt in 1883, the family of seven siblings was split up, with the younger children moving to Neustadt am Rübenberge with their mother, who worked to restore the family fortunes. In school, Ubbelohde showed real promise in scientific and technical subjects and by 1890, when the family was reunited, he was aiming to study science at university. Disaster struck four years later when his father died suddenly, leaving the family virtually destitute. While his mother scrambled to set up a business using peat to make cardboard, Ubbelohde studied chemistry at the Berlin–Charlottenburg Technical University where the teaching was dominated by Hans Heinrich Landolt (of clock reaction fame) and Emil Fischer. To help his mother, he directed the construction of a peat-processing plant in Groningen in the Netherlands, designing and patenting its equipment. But, a scientist at heart, he took a job in the petroleum department of the Royal Materials Testing Office in Berlin.

To improve vacuum distillations, he developed a compact and portable mercury vacuum pump, using a water aspirator to back a Töpler pump equipped with a McLeod gauge. The distillates were characterised in part by viscometry. For the most viscous glops, he used Carl Engler’s viscometer: an insulated cup with a hole in it – the time required for 200ml of liquid to drain out of the cup relative to the same volume of water is the viscosity in ‘degrees Engler’.

Ubbelohde joined Engler’s lab at the Technical University in Karlsruhe. By 1910 he had his habilitation and was on the faculty the following year. His colleagues included three future Nobel laureates: Fritz Haber, Hermann Staudinger and Leopold Ruzicka.

Ubbelohde worked on petroleum and fat chemistry as well as on textile fibres, patenting as much as he published. But viscosity remained one of his central concerns. The problem with the Engler viscometer was that it did not provide absolute values for the kinematic viscosity and its precision was modest. The only precise instrument available was Wilhelm Ostwald’s device in which a liquid was timed as it flowed through a capillary.

As Ubbelohde surveyed viscometry in general, the limitations of Ostwald’s device were all too apparent: as the liquid level dropped it slowed down in the capillary (which required a kinetic energy correction) and the difference in curvature of the meniscus at the top and the bottom of the capillary introduced a systematic but indeterminate error. This meant using very precise volumes; measurements as a function of temperature were exceptionally tedious because of thermal expansion.

His new viscometer was simple to use. A liquid was poured into the lower reservoir bulb and drawn into the bulb above the capillary by suction. The time taken for the liquid to travel between the marks M and M1 was then recorded. By adjusting the dimensions of the apparatus with extreme precision – Ubbelohde explicitly recommended commercial manufacture – the absolute viscosity could be calculated simply by multiplying or dividing the time by a power of 10. A set of ‘Ubbelohdes’ of different sizes could measure viscosities across six orders of magnitude in minutes.

Today, a quick glance at a rheology textbook reveals scores of approaches to viscosity measurements that have grown alongside the development of the myriad glops and goops we use today. And it leaves us to ponder deeper questions such as: how would we swim if we fell into a bucket of shampoo, or treacle?

I am grateful to Tony Ryan for the enthusiastic suggestion.