Benzyl alcohol? No problem. Dimethyl formamide? Tick. Quickfit glassware? Choose your fitting. GC mass spectrometer? Perhaps you’d like the HP 5972 5890 for a mere £11,500? With eBay, you could equip your lab for a fraction of the cost of buying everything new.

There are risks, of course. The 90-day warranty on that mass spectrometer is scant comfort for such an investment, and you might pause at the admission it is ‘seller refurbished’. But if you’re willing to take the gamble, you can probably get your hands on almost any equipment for a knockdown price. 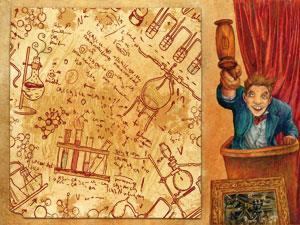 And you don’t have to rely on the hustle of eBay. Several companies now do a brisk online trade in used lab equipment. International Equipment Trading has been selling used and refurbished instruments for ‘independent laboratories, small and large industries, research institutions and universities around the globe’ since 1979, offering anything from electron microscopes to NMR spectrometers. The cumbersomely named GoIndustry DoveBid (‘Go-Dove’) is an international ‘surplus asset management’ company used by many British technology companies for auctioning off equipment after site closures. And LabX, founded in 1995, is establishing itself as a major clearing house for used labware, serving markets ranging from semiconductor microelectronics manufacturing to analytical chemistry and medical diagnostic labs. Companies like these don’t become successful without scrupulous attention to quality, reliability and customer satisfaction – they aren’t cowboys.

Yet these transactions probably represent the tip of the iceberg as far as used and redundant lab kit goes. Can there be a chemistry department in the developed world that doesn’t have analytical instruments standing abandoned in corners and basements, perfectly functional but a little outdated? Or jars of ageing reagents cluttering up storerooms? Or drawers of forgotten glassware, spatulas and heatproof mats? Purchases that once bit painfully into grants now lie ignored and will likely end up in a skip one day.

With universities struggling to accommodate cuts and a keen awareness of the need to recycle, this wastage seems criminal. But there appears to be little concerted effort to do much about it. Acquiring second-hand equipment is actively discouraged in some universities – partly because of understandable concerns about its quality, but often because the bureaucracy involved in setting up an ‘approved’ purchase is so slow and complicated that no one bothers, especially for little items. (One researcher used to buy sealant for bargain-basement prices until his department forbade it.) Inter-departmental recycling could be especially valuable for chemical reagents, since you might typically have to order far more than you really need. Auctioning them is another matter, however – selling chemicals requires a licence, which is, as one insider puts it, a ‘legal minefield’.

But universities rarely have any organised system for sharing and redistributing equipment internally, and so ‘lots of kit sits there doing nothing’, says one chemist I spoke to, admitting that this applies to his own lab. He also points out that the Engineering and Physical Science Research Council’s scheme for funding upgrades of small-scale equipment for early-career researchers seems to include no plans for reusing the old kit. This, he says, ‘could be worth well over £1 million, and there are many universities overseas who would love to get hold of it, and wouldn’t be concerned about fixing it themselves’.

It’s a measure of the slightly disreputable taint of the second-hand equipment market that several of the researchers I spoke to requested anonymity. One said he saved a lot of money buying in this way early in his career. ‘For a young academic it makes sense,’ he says – you can get instrumentation for perhaps a twentieth of what it would cost new. In equipment auctions ‘the prices can start at nearly nothing’, according to a chemist who helped auctioneers sell off equipment from his previous employer, the pharmaceuticals company Exelgen, when it closed its site in Cornwall, UK, in 2009. He adds that some second-hand equipment is bought up by the original manufacturer simply to maintain a good market for their new products. Not everything is a bargain, however: some used gear can sell for ‘nearly the price of new equipment as people get into bidding’, he says. On top of that you have the auctioneer’s fees, VAT, and perhaps carriage costs for equipment needing specialised transportation, not to mention the inconvenience of having to check out the goods first. So you need to know what you’re doing. ‘Most items require repairs, a service or at the very least some DIY to get them going,’ says another researcher, ‘but if you happen to have a student who enjoys playing around with kit or computers, you can save quite a lot of money.’ Happy hunting!