What did the Romans do for us?

Today’s researchers owe much to the chemists of civilisations past 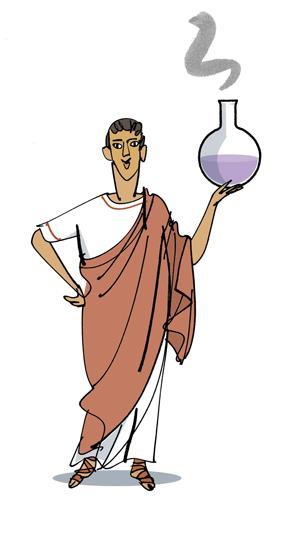 Having recently visited Italy’s stunning capital, I have a newfound respect for the Romans. The Coliseum, I learned, was designed not only to look spectacular, but with practicality in mind. With numbered entrances and seats, it formed the basic design upon which every modern sports stadium is based. The Romans also brought in pedestrian zones 1800 years before the first cars would appear on roads. As I learned more and more about their skill as architects and town planners, I began to wonder about the Romans’ legacies in science.

The Romans didn’t do research as we know it today. There were certainly philosophers, medicine men and alchemists, but the different scientific fields had not yet been defined. Arguably, Rome’s real ‘chemists’ were to be found among the builders and engineers, whose inventions have propped up countless towns and cities through the ages.

We tend to associate concrete more with 1960s tower blocks than ancient civilisation, but centuries before its re-invention, concrete – made by strengthening lime cement with crushed up stones – was a popular Roman building material. The domed concrete ceiling of the Pantheon – one of Rome’s best preserved structures – was built in AD126 under the emperor Hadrian (of wall fame). Temples, houses and even statues would often be built from solid concrete, tarted up with an outer coating of marble, granite or gold leaf. And Roman concrete was surprisingly strong – there are intact breakwaters in the bay of Naples that date back to 37BC, while modern concrete starts to crumble within 50 years or so under water. This has so impressed today’s researchers they are now revisiting long-lost formulas in the hope of improving today’s concrete structures.

The Romans were also skilled at mining metals, and were responsible for several technological leaps forward. Many of the techniques they pioneered are still in use today, including amalgamation – using mercury to extract metals from their ores. The Romans developed this method to purify gold, which is unreactive with most things but will form an amalgam with mercury. The Roman writer Pliny said of mercury (or ‘quicksilver’ as he called it): ‘On being briskly shaken in an earthen vessel with gold, it rejects all the impurities that are mixed with it. When once it has thus expelled these superfluities, there is nothing to do but to separate it to form the gold.’ This was just a case of evaporating the mercury. The technique became crucial during the 16th century gold and silver rushes in South America, although it also sparked environmental disaster, emitting vast amounts of mercury that continues to pollute the atmosphere.

Yet another bit of Roman chemical genius is glass. Though naturally occurring volcanic glass – obsidian – has been used since the stone age, and the ancient Greeks pioneered the glass making process, it was the Romans who figured out how to produce it in bulk, heating silica-rich beach sand in furnaces with soda (sodium carbonate found in natron – a mineral they took from lake beds) to lower the melting point. They also invented glassblowing – inflating molten blobs of glass into shapes – which remains a vital craft for creating custom glassware in modern scientific research. By the end of the Roman empire, glass was widely produced and used for containers, decorative tiles and even windows. Roman scientists never worked in labs, but if they did they would have been able to kit them out with petri dishes, test tubes and beakers of all shapes and sizes. Now, thanks to those brilliant 2000-year-old minds, that’s exactly what we can do.