Knowing which hand to play

Should you choose to work on a high-risk, high-reward project or dead cert? 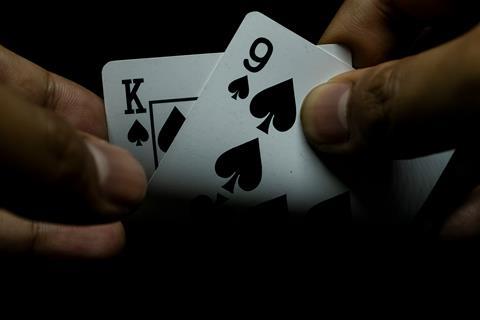 Gambling on a straight flush: on a project with huge potential but low expectations, you could win big, but if you’re sensible you won’t lose much

Every big R&D-driven organisation has a range of projects underway. I’ve worked in drug research my entire industrial career, and ‘portfolio management’ is its own field, laden with voodoo though it sometimes is. If you run too many projects, none of them can be given enough resources to succeed. Too few, and you put yourself at risk of debilitating failures with little backup. Likewise, if all your drug discovery projects are perfectly reasonable and well-precedented, your expected returns from them cannot be very high, because other people are working on the same things. But if they’re all cutting-edge high-risk-high-reward, odds are that you can’t run enough of them to mitigate the (rather high) chances that they will all fail, leaving you with nothing.

It’s one thing to help make these decisions, but there is another other angle: which sort of project should you, as an individual, be working on? People certainly have different personalities and interests, not to mention different tolerances for risk, so there’s no universal answer. I can, though, tell you what’s worked out for me so far.

Consider first the high profile golden project. It has lots of resources, it has lots of attention, and upper management has picked it as most likely to succeed. ‘That’s the one’, they say, ‘that’s the one that’s going to help us hit our targets this year and make sure that bonus gets paid out. Whatever that project needs, it gets.’ In a distant lab, though, sits a very different project. This one is… weird. Tricky. Difficult. People have either never tried this sort of thing at all before, or they have tried, failed and the project has moved on to investigate a completely new angle on the problem. Either way, there is certainly a lot of risk involved, and no one up in the managerial offices is expecting to see much from it this year. Perhaps not ever. Far fewer people are working on this one. Which team do you choose to join?

My calculations are a mixture of science, politics, and sheer self-interest. I think that those upper managers will have assigned a probability of success to the various projects, and that they regard the golden project as perhaps ten or even a hundred times more likely to succeed than the weird one. In reality, I think that the spread is much narrower. Strange ideas come through a bit more often than people give them credit for; but the more painful truth is that sure things wipe out more often than we like to believe.

If the high-risk project actually comes through, everyone involved is a hero, which is definitely a good career move. If it fails, well, no one really expected it to work, anyway. The landing is not too hard. But if the golden project fails, that landing will leave a substantial mark on the landscape. In many organisations, there will be a search for scapegoats: ‘Everything was going so well. Who did this to us?’ I have seen people make themselves feel better (and make the organisation feel as if something has been done about the situation) by picking a guilty party or two and unloading on them. What if everyone’s favourite project works, though? Well, everyone knew it was going to. Already had that one pencilled in. Good job, team, but of course we knew that one was a winner, right? The rewards may not be what you imagined.

The way I figure these situations, it’s better to be working on the higher-risk projects, because the expected payoffs versus the odds just look better. If this sounds like the calculation one would make when considering whether to call a bet in a hand of poker, that’s because it is exactly the same sort of problem. And if that analogy seems inappropriate or even offensive, perhaps you should set aside a little time for reflection. Research is at least partly a game of chance, and so, to some degree, is a career based on it. That’s one of the reasons we like it so much!