How the father of germanium turned the tap on glass stopcocks 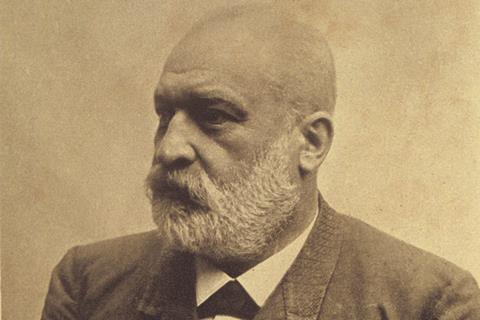 German chemist (1838–1904). Discoverer of germanium, inventor of the industrial manufacture of oleum, environmental chemist, and inventor of the three-way glass stopcock

In every family there is someone keen on genealogy. Long ago a colleague proudly showed me his academic family tree. He was only four generations down from Justus von Liebig and Friedrich Wöhler. The apparatus we use, too, has a lineage. As Harry Petroski has pointed out in his book Evolution of useful things, technical inventions like the zip-fastener have evolved from hooks and loops to today’s lines of interlocking teeth. In the lab, the stopcock on a Schlenk line started out differently from the one we know today.

Clemens Winkler had chemistry thrust upon him. Three generations of his family had managed a pigment factory in the mineral-rich Ore mountains in Saxony, near the border of what is now the Czech Republic. The factory manufactured cobalt blue paste that was used to colour glass and ceramics all across Europe.

Clemens studied for a doctorate in Leipzig, graduating in 1863 with a thesis on the chemistry of silicon, before working as a consultant chemist and analyst across the local mining districts. He made money by smelting nickel and cobalt, but also investigated a series of problems that plagued local industry. The smelting of sulfide ores resulted in acrid plumes of sulfur dioxide that were destroying the local forests, which were needed as fuel. In 1872, Winkler published a manifesto on the importance of applying chemistry to the metals and mining industries focusing on the need to understand the acidic oxides of sulfur and their salts.

His work made him acutely aware that existing gas analysis methods – based on combustion and explosion – were unsuitable for real-time monitoring. He favoured absorption, but this was frustrated by primitive means of handling gases. Mohr-type pinch clips and a ground glass stopcock could be put in-line with tubing, but Winkler wanted to be able to route gases in different directions. His idea was to make a three-way stopcock. But while three-way metal ball valves had been known since Denis Papin’s late 17th century air pump, not much was available in glass.

Winkler approached a glassblower in Leipzig, Franz Hugershoff, with his idea: a hollow tapering key with three holes placed mutually at 90°; two would be linked by a tube for a straight-through connection. A second, curved tube inside the key linked the third opening to a nozzle at the far end. Aligned parallel to the manifold, the stopcock would give a normal direct connection. When turned by 90° it could connect one side or the other of the manifold to the outside air. 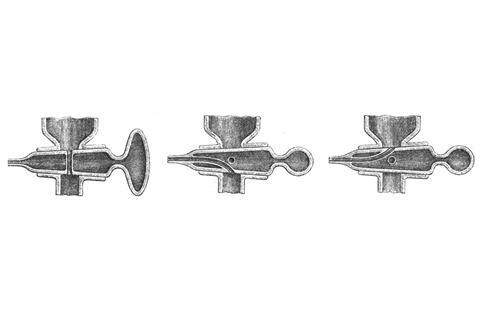 Hugershoff said it could not be done – with its delicate internal seals it was a ferocious challenge. But, after struggling for months, the glassblower delivered the goods. It was one of the first hollow ground glass taps. When Winkler published a long paper in 1873 describing practical methods of gas analysis for every significant industrial gas, he described a new gas burette equipped with the elegant stopcock. Hugershoff was listed as the tap’s exclusive maker in Winkler’s seminal 1876 introduction to industrial gas analysis.

By then Winkler was extremely popular and a brilliant lecturer at the Royal School of Mines in Freiberg. Within weeks of his appointment, he was commissioned by the Austrian government to study how to make best use of the newly discovered deposits of sulfur near Kraków, a grant that cemented Winkler’s interests in gas analysis and the chemistry of sulfur. Aware that sulfur dioxide posed a major environmental threat, Winkler set about finding ways to improve sulfuric acid preparation. By dispersing platinum on asbestos fibres and optimising the ratio of oxygen to sulfur dioxide, Winkler developed a high yielding process to manufacture fuming sulfuric acid (oleum) at the very moment when the coal tar dyestuff industry was taking off. As sulfuric acid production rocketed, Winkler’s introduction of lime to absorb sulfur dioxide from smokestacks limited environmental damage. The technique remains in practice today.

Winkler went on to explore the chemistry of indium, the element discovered in Freiberg by his teacher, Wilhelm Reich. This culminated in his analysis of the mineral argyrodite, which yielded a key element ‘missing’ from Mendeleev’s periodic table, eka-silicon. Winkler patriotically named the new element germanium.

But his stopcock never really caught on. It was probably too difficult to make. Within less than 10 years it was superseded by firm Greiner and Friederichs’ double-oblique stopcock.

Today, our choice of glassware links us in just one or two steps to the heroic days of elemental discovery and those early glimmers of environmental awareness. In the simple act of turning a tap we emulate and pay homage to our ancestors.