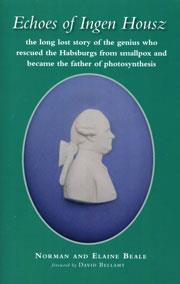 Jan Ingen Housz was a Dutch doctor, born in 1730. His reputation was founded on the success he had in the technique of variolation - inoculation against smallpox using the live virus. This was a risky procedure, though the only preventative against the disease until vaccination using the safer cowpox came along, essentially as a result of Edward Jenner’s work in the mid 1790s.

Influential patrons handsomely rewarded Ingen Housz for his work and so he had the time to devote himself to a study of chemistry. In the 1770s there was much activity to determine the ’goodness’ of air (essentially the oxygen content). The instruments used were fairly crude, but one of the best was a device based on the oxidation of nitric oxide. Ingen Housz used this ’eudiometer’ to investigate the bubbles arising from plants submerged in water.

He was not the first to probe this aspect of botanical chemistry. Joseph Priestley had got there first, and noted that seaweed bladders were rich in oxygen (though he never used this name for the gas) and that plants could ’restore air which has been injured by the burning of candles’ (1780).

But crucial to this process is light, a fact that eluded Priestley but which Ingen Housz spotted and published in 1779. The latter was a meticulous experimenter and he came up with the theory of photosynthesis that we know today. Unfortunately, almost immediately, Priestley laid claim to Ingen Housz’s discovery. This appropriation and claim for precedence caused the Dutchman considerable vexation for many years to come.

This is an engaging account of the life one of the minor pioneers of chemistry. Although only a relatively small part of the book is devoted to his investigations into photosynthesis, at ?25 for 630 well-researched pages, it is good value.